The International Space Station is a huge spacecraft. It is larger than a soccer field as illustrated below. It has as much living space as a six bedroom house in the cylindrical modules near the center. The solar panels add a large surface area and drag force. At an altitude of 400 km, it needs periodic reboosts to raise it back up. They occur every 3-6 weeks on average. This post describes how the reboosts are done.

Some Ideas About Orbital Mechanics

Any objects in orbit at low altitude must travel around the Earth at nearly 8 km/s, nearly 5 mile/s. At that speed, it can coast around the circumference of the Earth. All the while, it is falling. But, the surface of the Earth and the curvature of the falling path are the same radius. The falling object does not fall closer to the Earth. Isaac Newton argued the physics of this in his monumental work Principia published July 5, 1687. His illustration below is from that work.

A projectile fired horizontally from a very tall mountain would curve downward and hit at point D. A faster speed would let it fall at E. Even faster it would reach F and B. An optimal speed would allow it to curve completely around as with A and never hit the ground again. This argument assumes no air resistance to slow the projectile.

In reality, all orbiting objects slow down slightly over time. Their orbits slowly spiral toward Earth bringing them deeper into the thicker atmosphere. That orbital decay for the ISS is relatively quick due to its massive size and surface area. It needs regular and frequent reboosts in speed in order to regain that lost altitude.

First, we need to look at the orbit of the ISS drawn to scale. My desktop planetarium software has the orbital details of the ISS in it. I positioned the viewpoint above the equator and made this 20 sec movie. The altitude is about 400 km. It takes nearly 90 minutes to complete an orbit. As the ISS travels around, the Earth turns toward the east. So, the next time around, the ISS passes over different parts to the west of the previous track. Notice that the plane of the orbit is inclined to the equator by 51.6˚. It travels far enough to the north to allow the Russian spacecraft to launch and dock with it. Do you see the Moon in the distance?

No doubt, you have seen many images of Earth from the vantage point of the ISS or another spacecraft such as the Space Shuttle. The images give the impression of being at a much higher altitude. This image is a good example. But, it is an illusion created by the wide angle optics and perspective. The video above shows the true perspective. The ISS is not very far up.

The ISS was started in November 1998 with the launch of the first module Zarya from Russia. The altitude was 390 km. Over the first 7 years, the altitude was maintained between 340 and 400 km. This chart shows altitude plots in three colors. Most orbits of spacecraft are not perfect circles. They are more or less egg shaped with high and low altitude points. Blue is the high point of the ISS orbit or apogee. Green in the low point of the orbit or perigee. Red is the average altitude. Notice how several weeks go by and the graph lines descend followed by a sudden step rise. Those are most obvious in the first two years. It descends again over time, then a rise. The descents are from atmospheric drag and a drop in altitude. The steep rises are the reboosts to higher speed and altitude.

Here is a 10 year chart with only the average altitudes plotted for a simpler appearance. The reboosts are where the descending line suddenly jumps up to a higher value and starts to descend again. 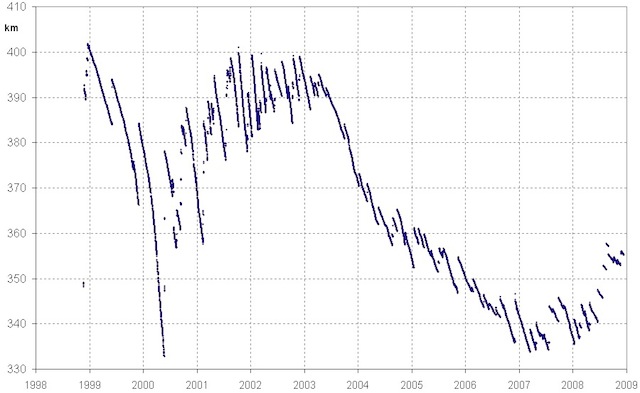 Lastly, we have a chart from the recent 12 months. It is provided by Heavens Above, a great web site worthy of a browse. The height scale on the left of this chart shows the ISS is being kept at a fairly high altitude compared to earlier years. There are two reasons for that. It is more economical. There is less drag and fewer reboosts are needed over time. And, the atmosphere has been slightly swollen due to some increased solar activity in the most recent sunspot cycle. It is not much, but the higher atmosphere causes more drag on ISS. 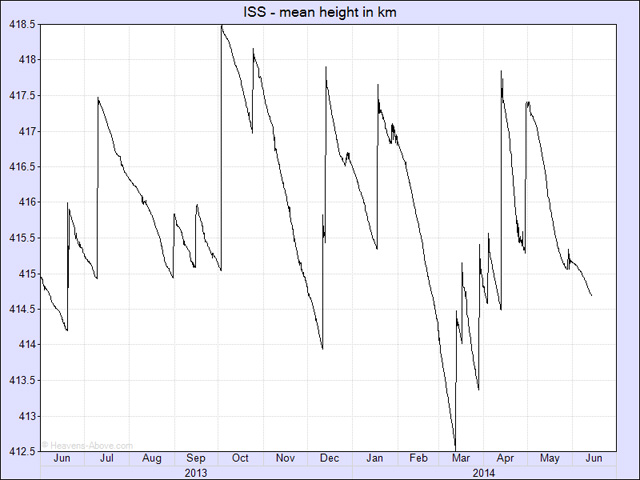 How The Speed Is Increased

Many of the service and cargo modules from the U.S., Russia, and other cooperating space programs such as ESA and JAXA are supplied with strong enough engines and fuel that allows them to speed up the station a few meters/sec. That is all that is needed in order to achieve a reboost. Here is an animation example from the ESA. Notice the slow and gentle acceleration. If you drop something on Earth, it will speed up almost 10 meters/sec faster each second of fall. The acceleration of the ISS is tiny compared to that, only a few tenths or hundredths of that.

What would it feel like as an astronaut passenger inside the ISS? Would you be able to notice or feel it? You know how it feels when a car or airplane accelerates. It feels like you are being pushed into the seat. But, that is not really what is happening. Instead, the seat is being pushed into you by the acceleration of the vehicle. Your body wants to remain in the current state of motion. The vehicle is forcing your body to change its state of motion.

I have two NASA videos to illustrate the sensation felt by the occupants of the ISS. The camera view in the first video is pointing toward the rear of the spacecraft. The video shows them having some fun for a couple of minutes.

Commander Jeff Williams of Expedition 22 in 2010 explains more of the details about reboost in this next video. It takes about 5 minutes. It is well worth the time spent to watch the whole thing. He does an interesting demonstration.