Mark your calendar for these events in August. Brought to you by the folks at NASA and JPL. All events are free. No registration required.

Wear a mask and distance yourself if you are with a group.

END_OF_DOCUMENT_TOKEN_TO_BE_REPLACED

This wood engraving by an unknown artist appeared in Camille Flammarion‘s 1888 book L’atmosphère : météorologie populaire (“The Atmosphere: Popular Meteorology”). There are multiple interpretations of the engraving.

Flammarion authored more than fifty works, including those about astronomy, science fiction novels, psychical research and related topics. He also published the magazine L’Astronomie, starting in 1882 and had a private observatory at Juvisy-sur-Orge, France.

In 1907, he wrote that dwellers on Mars tried to communicate with the Earth in the past and that a seven-tailed comet was heading toward Earth. In 1910, he believed the gas from comet Halley’s tail would kill all life on planet Earth.

“A missionary of the Middle Ages tells that he had found the point where the sky and the Earth touch.”

The very popular web site Astronomy Picture of the Day featured this black and white engraving on 5 April 2020. Readers were invited to colorize the image using any method they preferred. I was happy to give it a try using Photoshop Elements. Many others before have done so as evidenced in this Google Image search result.

These should be free of risk sky viewing opportunities as long as you stay the appropriate distance from other viewers, wash your hands, and keep them from your face. Enjoy. 🙂

Many years ago I tried to view the Trifid Nebula with a 5″ diameter telescope. A dark sky was needed. My back yard in town was not dark enough. I scouted the neighborhood and found a dark place behind the local elementary school. An electrical outlet was also available to run the drive mechanism on the scope. As a precaution, I called the local police station and let them know my plan to be behind the school that night. They said ok to that. 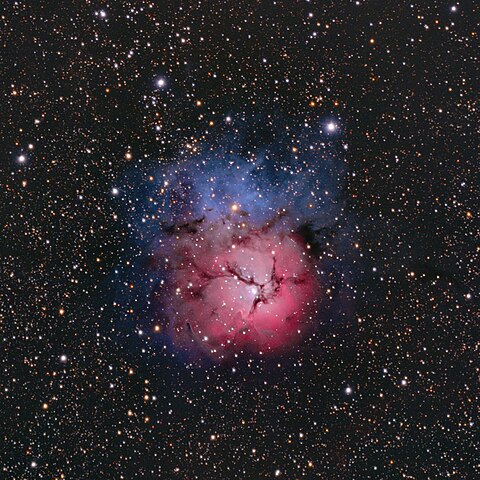 Darkness approached. I drove to the school and set up and aligned my telescope. My eyes were dark-adapted after 20 minutes. I saw someone across the school yard walking their dog in the very dim light. I didn’t think they saw me.

The views of M20 were excellent. I could just make out the dark dust lanes visible in the reddish part of the image above. The image above is a time exposure revealing many details. It is not mine.

I was intent on pointing the scope to another nearby object when I heard footsteps behind me. I turned to see who it was. A bright flashlight was pointed directly into my face. My dark-adaptation was over. The person with the bright light in my face asked who I was and what I was doing. It was a policeman. That dog-walker had called to report a suspicious person behind the school.

I explained who I was. He put down his light from my face. I told him I had called that afternoon to let them know I was going to be here. He said I should have called just before I came over. The day shift doesn’t usually talk to the night shift about stuff like this.

I was reminded of this story when I read the Focal Point story on the last page of the August 2019 Sky & Telescope magazine. It was titled Encounters With Police by Dennis Kelly. He is an amateur astronomer and holds two criminal justice degrees. He encouraged amateurs to be careful and very transparent about what you are doing in the dark with weird looking apparatus. Bad things could happen and much of it by accident.