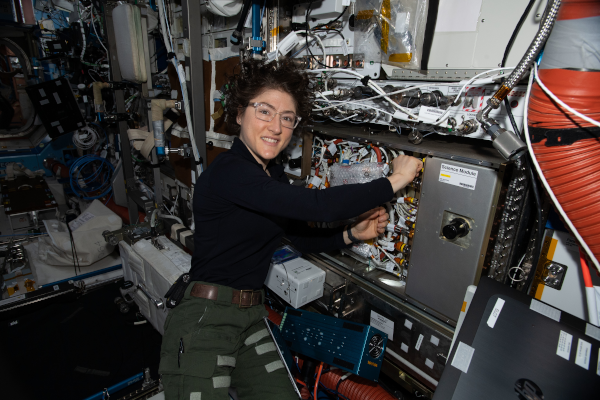 It has been a busy year of research aboard the International Space Station. In November, we celebrated the 20th year of continuous human presence aboard the space station, which so far has hosted 242 people and more than 3,000 science experiments. During the past year, research has ranged from growing radishes in microgravity to capturing 360-degree footage of life aboard station to monitoring our planet. This research benefits people on Earth while helping prepare us to explore farther into space.

More about this story is linked here.

I awoke at 5:34am and remembered an email from a few days before. It said the space station was to pass over my region starting at 5:38. When I got to the front window, it was high overhead moving toward the eastern horizon.

Looking to the southeast I found Mars in Scorpius. It had moved from its position the morning before. Here depicted by The In-The-Sky.org Planetarium of Dominic Ford. Being only 13˚ F this morning, I opted not to go outside for my own photograph.

END_OF_DOCUMENT_TOKEN_TO_BE_REPLACED

I taught physics to high school students for my career. Names of important people in the history of physics, chemistry, and other sciences were always included in our textbooks and discussions. These people laid the foundation for what we believe today about how the world works.

In 1927, many of those individuals gathered for the Solvay Conference in Brussels. The colorized photograph below may have captured the most intelligence in one place and time the world has seen. Of the 29 attendees, 17 had won, or would go on to win, the Nobel Prize. Notable in the front row is the only woman at the conference, Marie Curie. She had won two Nobel Prizes in physics and in chemistry.

The primary mission of the conference was to discuss the impact of a new theory embraced by the man at the far right in the second row. The scientist Neils Bohr strongly supported the theory of quantum mechanics. He and Werner Heisenberg argued for what is called the Copenhagen Interpretation. In it, physical systems have a set of probabilities of outcomes if they are going to be measured. The act of measurement causes that set of possible probabilities to reduce to one outcome. Albert Einstein, center front row, did not like the idea of probabilities in nature. He said “God does not play dice”. Bohr replied “Einstein, stop telling God what to do”. Quantum mechanics is widely accepted today and is applied in many aspects of our lives.

The scientific contributions by each of the pictured individuals are described at this link. Scroll part way down that page to find them.

I explained to my son how my shadow was cast almost straight down at noon when we were 12˚south of the equator in Peru. That had never happened to me before. Living 42˚north of the equator, we always cast shadows. They are short in the summer when the Sun is high in the sky and long in the winter when the Sun is low. But, never straight down like this.

My son posed a question about sunrises at the equator. “Does the Sun rise straight up due east each day of the year.” I said it doesn’t rise due east every day. But, it does rise nearly straight up. He acted skeptical. It was time to use desktop planetarium software to simulate the view.

END_OF_DOCUMENT_TOKEN_TO_BE_REPLACED

Time for a physics lesson. I picked up a little 3″ diameter concave makeup mirror and looked at myself up close. It enlarged my image and looked upright. I extended my arm slowly while looking at myself and noticed my image got bigger and blurry. As I moved the mirror farther, my image inverted and started to get smaller again. I wondered how my image would look if the mirror was across the room. I stood it on the mantle in front of the clock. I was barely visible.