I taught physics to high school students for my career. Names of important people in the history of physics, chemistry, and other sciences were always included in our textbooks and discussions. These people laid the foundation for what we believe today about how the world works.

In 1927, many of those individuals gathered for the Solvay Conference in Brussels. The colorized photograph below may have captured the most intelligence in one place and time the world has seen. Of the 29 attendees, 17 had won, or would go on to win, the Nobel Prize. Notable in the front row is the only woman at the conference, Marie Curie. She had won two Nobel Prizes in physics and in chemistry.

The primary mission of the conference was to discuss the impact of a new theory embraced by the man at the far right in the second row. The scientist Neils Bohr strongly supported the theory of quantum mechanics. He and Werner Heisenberg argued for what is called the Copenhagen Interpretation. In it, physical systems have a set of probabilities of outcomes if they are going to be measured. The act of measurement causes that set of possible probabilities to reduce to one outcome. Albert Einstein, center front row, did not like the idea of probabilities in nature. He said “God does not play dice”. Bohr replied “Einstein, stop telling God what to do”. Quantum mechanics is widely accepted today and is applied in many aspects of our lives.

The scientific contributions by each of the pictured individuals are described at this link. Scroll part way down that page to find them.

There was sad news in the physics community about the death of Nobel Laureate Leon Lederman on 3 Oct 2018. He was 96. He lived a distinguished career in physics research and education. 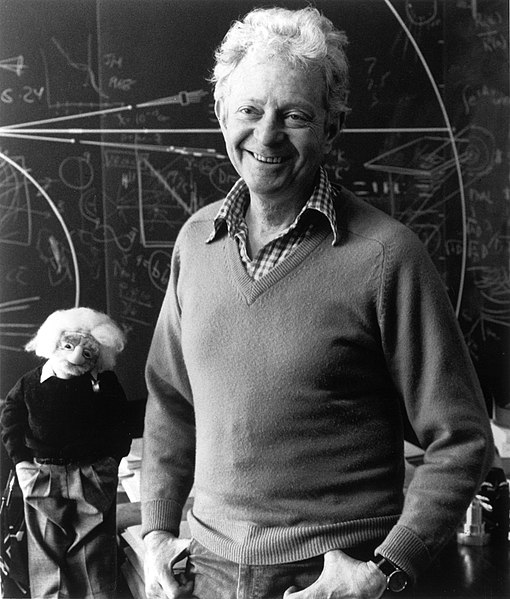 My first contact with Leon came in 1983 as a participant in the first Summer Institute for Physics Teachers held at Fermilab near Batavia IL. Participants met daily for several weeks. Several days each week started with a talk by a physicist explaining the state of research about fundamental particles which make up the world we know. We had special tours of the research facilities. Through these insights we were charged to include modern physics topics into our classroom teaching.

Dr. Lederman was the lab director at that time. His interest in science education often brought him to our group of teachers. He showed up at the talks, took some tours with us, and talked informally with us. He always carried a smile and had a good joke to tell. His hope for the Theory of Everything was that it would fit on a T-shirt. Simplicity of concepts was important.

I took over as coordinator of the physics part of the Summer Secondary Science Institutes until 1992. That’s me next to Leon. The Fermilab Education Office had a farewell dinner in my honor when we moved from the area. Seated at my table that evening were my wife, my closest teaching colleagues, and Leon. I was thrilled to share the evening with him.

One sad facet of the news of his death included the fact that in 2015 he sold his Nobel Prize for $765,000 to pay for medical expenses related to his care in a nursing home for dementia. His wife said:

“It’s terrible,” Leon’s wife Ellen Lederman told NBC News back in 2015 after they had to sell the Nobel Prize. “It’s really hard. I wish it could be different. But he’s happy. He likes where he lives with cats and dogs and horses. He doesn’t have any problems with anxiety, and that makes me glad that he’s so content.”

It is inexcusable that this wealthy country does not have a plan in place to guarantee care and comfort to its citizens. I believe it should be a right. Leon Lederman certainly did his share of contributions to our country. He deserved better.

I headed home after attending the public lecture on aurorae by University of Iowa professor Craig Kletzing. One part of his talk included a demo of color emissions from the element oxygen. It is responsible for nearly all the colors associated with aurorae. We needed diffraction grating glasses to see the demo effect such as these.

As I drove home, I noticed the bright crescent Moon. I stopped the car to look through my grating glasses. Once home I set up the camera with the grating over the lens. It was a nice way to end the day.

Stars go through changes over the course of their existence. The rapidity and violence of those changes depends upon the mass of the star. Low mass stars are slow to change. High mass stars change quickly. Perhaps a case of Live Fast, Die Young.

This post is intended for those readers who have wondered what happens during the lifetime of a star. It is not intended to be an exhaustive description of the life-cycles of stars. Some of the numbers used here represent a range of values assumed for these events. Sources will differ some. There are many parts of star behavior that are complicated and not understood well by the experts. General concepts are presented here to make the processes more understandable.

All stars involve two types of processes that oppose each other. Gravity pulls the star components inward and tries to reduce the star’s volume. Nuclear fusion exerts outward forces and tries to increase the star’s volume. This interplay of opposing forces can create equilibrium. Change in strength of the processes will cause the star to either expand or contract in size. Since the mass of the star is quite constant, the inward pull of gravity is constant. The outward forces can change in strength as nuclear fusion processes change.

END_OF_DOCUMENT_TOKEN_TO_BE_REPLACED

A little more than 1.3 billion years before 14 Sep 2015, a pair of 29 and 36 solar mass black holes orbited each other, slowly getting closer together. On that date, they merged into one black hole of 62 solar masses. Their merger radiated 3 solar masses of energy in a fraction of a second.

This animation from Simulating Extreme Spacetime SXS uses calculated effects from the equations of Einstein to simulate the view of the star field behind the black holes. Imagine you are close enough to watch their dance. Paths of starlight are altered by the masses of the black holes. It is also greatly slowed down. The black holes were actually moving a high fraction of the speed of light as they orbited just before merger.