UPDATE: May 26, 2014 | For those of you interested in keeping informed about climate issues, the agency NOAA offers Climate.gov. I suggest that you bookmark the site and visit it regularly. One of their offerings is called the ENSO Blog. It addresses specific concerns about El Niño. On May 19, 2014, four days after this post of mine, the ENSO Blog published an excellent summary of the potential global and regional effects of a strong El Niño this year. I invite you to read it in conjunction with this post of mine.

On May 8, 2014, scientists at the Climate Prediction Center of the National Weather Service (NWS) announced there was a 65% likelihood of a strong El Niño event this summer/fall. There is still uncertainty when and exactly how strong. Indications are that it may rival the significant El Niño of 1997. This image compares the sea height for the regions of the equatorial Pacific on the same date in 1997 and 2014. Warmer than normal sea water moves east toward South America. The warmer waters cause expansion and higher than normal sea heights along the equatorial zone. Both are markers for the onset of El Niño.

It was one of the strongest El Niño events observed. Extreme weather affected several continents. One of the warmest and wettest winters on record took place in North America. California and Florida were both strongly affected. Strong rainstorms and flooding occurred in Peru, Mexico, and other parts of Central and South America. Severe droughts struck Indonesia and parts of Asia.

Will the same weather events happen to those areas this year? That cannot be predicted with certainty. Past history does show an increased tendency toward these abnormal events. None of the climate models predict a La Niña, while 16 of 20 models predict El Niño will occur this year. According to climatologist Bill Patzert of NASA’s JPL, who has studied El Niño for twenty years:

“If El Niño returns, the American West and Southwest could see major relief next winter from the long-lasting, punishing drought. Further, the very frigid winter in the upper tier of the U.S this past winter could do a flip to mild next winter.”

The resulting effects from El Niño and La Niña are for the Pacific ocean waters to effectively and slowly slosh back and forth from east to west. This phenomenon is referred to as the El Nino-Southern Oscillation (ENSO). It has wide ranging and sometimes surprising impact on weather patterns in some unlikely parts of the world. The link to ENSO provides some good maps to those effects.

What is El Niño?

The normal winds in non-El Niño years are from the east to west along the equator. These winds slowly transport warm waters and humid air to the western Pacific toward Indonesia and Australia. The movement of the water from the eastern Pacific causes cool nutrient rich waters to be drawn up toward the surface along the South American coast. Fishing is good with abundant sea life.

During El Niño, the easterly winds subside. Warm tropical waters don’t flow west and tend to slosh back slowly to the east toward South America. That situation is currently taking place. The warm waters retain a large amount of heat energy. The heat causes expansion of the water which is detectable by satellite measurements as slightly higher sea levels compared to normal. The images of the Pacific at the top of this post are sea height anomalies from 1997 and this year. Both show elevated levels along the equator as reds.

Below is another sea height image from May 6 of this year by the Jason-2 satellite. On the MM scale, 120 millimeters is a little less than 5 inches. The blues are sea heights below normal levels. What you are seeing a large slow moving Kelvin wave progressing to the east over time. Classic El Niño indicator. 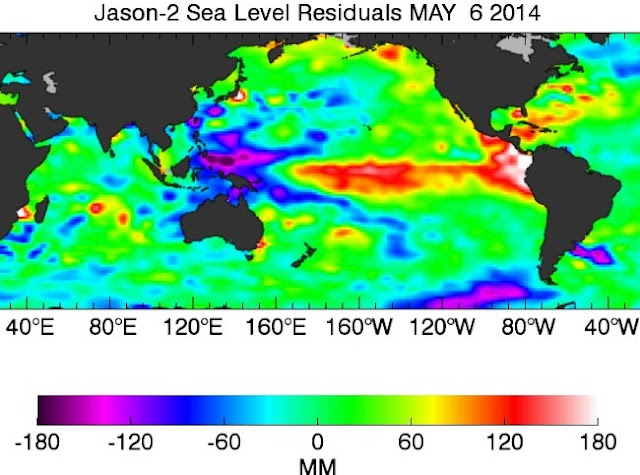 What is La Niña?

During a La Niña, the easterly trade winds blow stronger to the west than normal. This condition typically follows on the heels of El Niño. More than normal cool and nutrient rich waters are drawn up along the South American coast. They are carried by the stronger winds toward the central Pacific. More warm and energy laden waters are driven toward Australia and Indonesia than normal. That causes the potential for extreme rainfall events in those areas. Here is a NASA Earth Observatory image of the Pacific during a La Niña in September 2010. Blue indicates cool, nutrient rich waters, below normal in sea height. They are moving west. 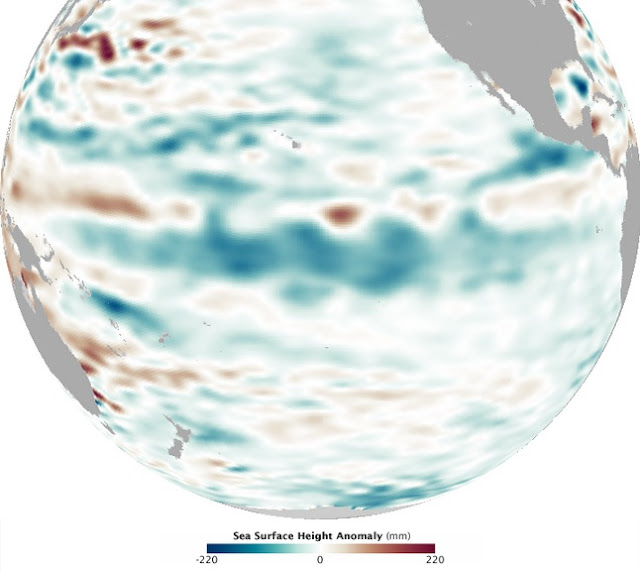 What Is Likely To Happen?

That is very difficult to answer. This developing situation has been watched carefully for several months. The conditions appear to indicate a strong El Niño is likely this summer and fall. Scientists have seen the conditions maintained for a three month duration leading them to issue the El Niño watch with 65% likelihood. That is up from 50% last month. The same sea conditions as now occurred in the spring of 2012 which prompted an El Niño watch at that time. But, that event was not able to maintain itself for three months and was cancelled.

As stated above, if this event does prove to be strong as expected, we might see some much needed drought relief for the California coast and a milder wetter winter in the eastern two-thirds of the U.S. The hurricane season in the Atlantic is also usually less active during El Niño. These strong events have the potential to cause widespread disruption of normal weather patterns over large areas of the globe.

These are not guaranteed to occur. But, the world should be on notice.