The converging, or convex lens, is able to bring parallel rays of light toward a focal point. As a child, I played with a magnifying glass lens to burn leaves, grass, and other things.

The lens can also be used in a different way to project light rays parallel to each other in a beam. Simple projectors work on this basic principle. A lighthouse is designed to do this.

END_OF_DOCUMENT_TOKEN_TO_BE_REPLACED

The United Nations Intergovernmental Panel on Climate Change (IPCC) released over the past six months three parts of their working study reports. High on their priorities were efforts to mitigate the long-term impacts of climate change. Here are some details by Weather Underground meteorologist Dr. Jeff Masters. 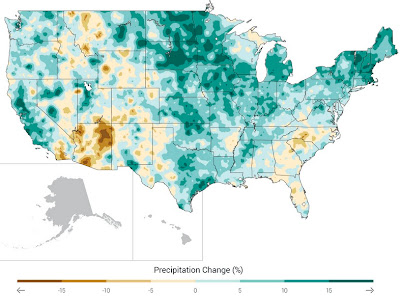 On May 6, the National Oceanic and Atmospheric Administration (NOAA) issued their National Climate Assessment for the United States. The report is issued every four years. Work by 300 U.S. scientists examined climate change in the U.S. A 60-member committee oversaw and compiled the report to the nation.

What makes this report significant is the focus on impacts of climate change on certain regions of the country and on specific types of impacts being observed now. These impacts have growing economic importance on most segments of our society.

One example is indicated by this graphic from the report highlighting changes in precipitation from 1991-2012 compared to the base period of 1901-1960. The midwest and the northeast show very significant increases in the dark green shades. The southwest and southeast show decreases.

The full report is available online. The Jeff Masters blog summary is available here. My notes on the key messages from the overview follow.

Key Messages in the Report

These messages do not paint a pretty picture. What the report emphasizes is that climate change is not something that might happen in the future. We cannot ignore it and hope it won’t happen. It isn’t something that is an annoyance and maybe someone else will take care of it.

Climate change has been happening. It is happening now in the U.S. and worldwide. It will continue. It is up to each of us to be aware of it. We all have a role to play, however large or small, in reducing the negative impacts we have for the immediate and distant future. This is our home. It will be passed to our children and grandchildren. We should take better care of it.