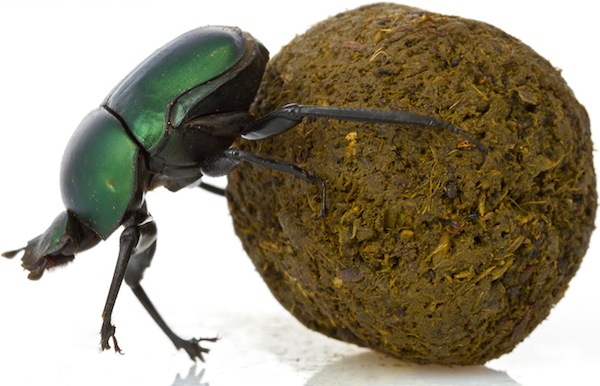 I grew up on a farm in the midwest. Dung beetles were common in the summer in the animal lots. My uncle took great pleasure telling me a detailed story when I was about ten about how he spent several hours one day watching the progress of a certain beetle. He told of how it burrowed into a cow pile, formed a ball, and rolled it to a prepared spot in the dusty lot to bury it. He had such fun telling that story.

The dung beetle is an interesting species. There are 2000 species in Africa and 7000 worldwide. About 90% of the species live entirely in and under the dung pile, never going anywhere else. The remaining 10% roll a ball of dung to a new location. Dung beetles have an interesting niche in the ecosystem where they live. I’d like to share more of the information about them I found recently.

As I prepared to ride the elliptical for exercise a few days ago, I went to Ted Talks on my iPad. The talks fit well into the ride and make the time pass quickly. That day I noticed a talk about the dung beetle. It was presented by Marcus Byrne, professor of zoology and entomology at Wits University in Johannesburg, South Africa. Among various areas of research, his…

…work has also focused on the unique mechanics of the dung beetle. His research has shown that the dung beetle has a highly effective visual navigation system, that allows them to roll balls of animal dung with precision back to their home, even in the dark of night and the hottest of conditions. Byrne wonders: can this beetle teach humans how to solve complex visual problems?

Watch this short 17 minute video to see for yourself how the dung beetles were put to the test. See how they navigate with their balls of dung. The tests they had to negotiate are interesting. Each one was designed to tell what factor the beetle was using to navigate. Listed are a few highlights to watch for. Enjoy the video. Feel free to comment below.

• Dung beetles are good dancers.
• They see and follow polarized light.
• They make course corrections if they are forced to deviate.
• The beetles have a way of coping with high temperature of the ground.
• Certain dung beetles can do path integration as a compass guide to home. 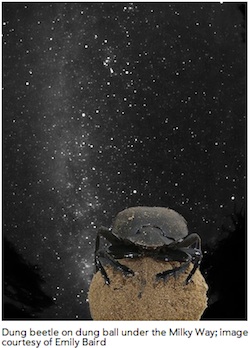 African dung beetles (Scarabaeus satyrus) use strong light cues from the sun and moon to navigate. There is more to the story.

“Even on clear, moonless nights, many dung beetles still manage to orientate along straight paths,” Marie Dacke, of Lund University in Sweden, said in a prepared statement.“We were sitting out in Vryburg [in South Africa] and the Milky Way was this massive light source,” said Marcus Byrne, of Wits University and co-author on the new study, in a prepared statement. “We thought, they have to be able to use this—they just have to!”

Their findings were published online January 24 in Current Biology.

To see if the starry sky was their guide, researchers set up some ingenious tests for the industrious creatures. 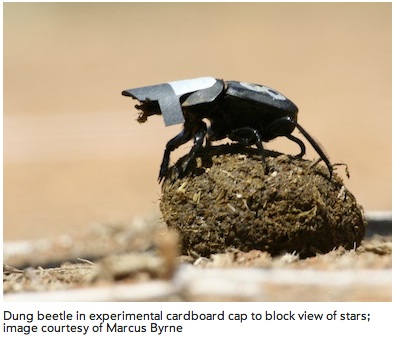 Researchers designed special cardboard and clear caps. The cardboard cap kept them from seeing the sky. On a starry, moonless evening, they started the dung beetles with cardboard caps from the center of a ring. The area was flat and sandy, surrounded by a wall. Beetles in a second group were uncapped. A third group wore clear caps. Beetles with no caps and those with clear caps had normal ‘straight’ paths.

Beetles with cardboard caps took longer and had more erratic paths. Apparently they were seeing something in the night sky.The researchers made a second ring to make sure nothing like trees or bushes were visible to the beetles. The beetles were timed to see how long it took them to reach the outer edge after starting from the center. Straight paths would reach the wall sooner. Wanderers would take longer.

Were the beetles seeing the stars, or the Milky Way stripe across the sky? “The vast majority of these stars should be too dim for the tiny compound eyes of the beetle to discriminate,” the researchers noted in their paper. They took their beetles and rollerball arena to the Johannesburg Planetarium. It could project 4,000 stars and the Milky Way on the domed ceiling for the beetles to see. They tested them again.

“This clearly shows that the beetles do not orientate to a single bright ‘lodestar,’ but rather to the band of light that represents the Milky Way,” the researchers noted. “This finding represents the first convincing demonstration for the use of the starry sky for orientation in insects and provides the first documented use of the Milky Way for orientation in the animal kingdom,” the researchers wrote.