Amateur and professional astronomers know that the apparent brightness, or magnitude (V), varies greatly from planet to planet. For example, Venus is high in the morning sky at twilight at this time in its orbit. It is very bright. It has a large apparent magnitude. Neptune has a very low apparent magnitude due to its distance from the Sun. Most people have no idea where to look for it and have never seen it.

This chart is in Computing Apparent Planetary magnitudes for The Astronomical Almanac authored by Anthony Mallama and James L. Hilton of the US Naval Observatory in June 2018. It is an attractive display of the apparent magnitudes of the planets as seen from Earth. Not only is it artistic, there is a lot of science to see if we examine the details contributed by each planet. 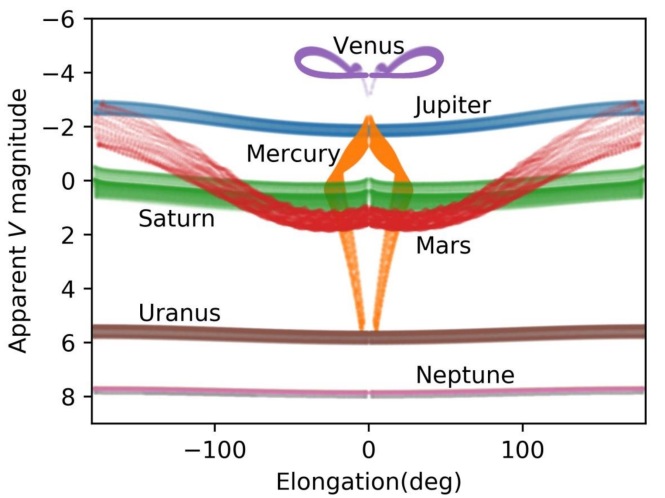 Magnitude in astronomy refers to the brightness of an object. It is believed by many that Hipparchus (c. 190 – c. 120 bc) ranked the stars on a scale of apparent brightness from 1 being the brightest and 6 the dimmest to the eyes. Ptolemy used that system in 150 AD.

Apparent Magnitudes of the Planets

Consider the orbits of the outer gas giant planets. Earth’s orbit is the small innermost circle in the following diagram. The radius of our orbit from the Sun is called 1 Astronomical Unit of distance, or 1 AU. The gas planets are much farther from the Sun. Neptune = 30.0 AU. Uranus = 19.2 AU. Saturn = 9.6 AU. Jupiter = 5.2 AU. We see the full sunlit side of each planet because they are so far away. The farther the planet is from the Sun, the dimmer it appears to us. Jupiter appears at about magnitude -3 and Neptune at about magnitude +8.

Our view of Neptune from Earth is always close to 30 AU. Earth orbits much faster than Neptune. During part of our orbit we are only 29 AU from Neptune while we are 31 AU away 6 months later. That is barely 6% difference in distance. The change in brightness of Neptune due to that small distance change is not noticeable to the eye. Sensitive instruments could detect it.

Suppose the apparent magnitude of Neptune was observed from Earth for 50 years and plotted often. The next diagram is how the magnitude would vary according to Anthony Mallama and James L. Hilton of the US Naval Observatory. The vertical scale has dimmest at the bottom and brightest at the top. The magnitude of Neptune varies only slightly on the vertical scale due to Earth being slightly closer and farther from Neptune as we orbit the Sun.

Elongation of 0˚ means Neptune is in the same direction as the Sun. It is called conjunction. That puts the Earth farthest away from Neptune as is possible. The brightness of Neptune is at its lowest values. Because Neptune is very far away and our orbit doesn’t change that distance by much, its apparent magnitude varies only a small amount.

Similar arguments hold true for the magnitude of Uranus if observed during a 50 year period. It is 19.2 AU from the Sun. As Earth orbits at 1 AU, the distance to Uranus varies from 18.2 to 20.2 AU. That is a slightly larger percentage than for Neptune. The values of magnitude are in the range of 5.6 compared to 7.8 for Neptune meaning Uranus it is a brighter planet.

The apparent magnitude of Saturn is also affected by the orbital distance of Earth and by the elongation of Saturn with respect to the Sun. We are significantly closer to Saturn than Uranus or Neptune. Saturn has an orbit of 9.6 AU. Earth’s orbit distance changes our distance to Saturn from 8.6 to 10.6 AU making its magnitude a little more than 1.

The tilt of the ring system is another significant effect impacting the apparent magnitude of Saturn. When seen edge on, the rings are practically invisible and reflect no sunlight to Earth. We only see light from the globe of the planet. When the rings are at maximum tilt, we see more reflected light from Saturn. That tilting rings effect is shown in the first 90 sec of this video.

The changing tilt of the rings causes a large difference in magnitude of the planet as viewed from Earth. It causes the width of the band in the diagram below to be rather wide.

Another curious effect appears in this graph at elongation of 0˚ when the Sun and Saturn are nearly aligned as seen from Earth. The planet would normally be at its most dim when far from Earth in that alignment due to the larger distance. But light reflected back from the planet creates a surge in brightness close to that alignment. It may to be caused by increased exposure of the ice crystals in the rings. Another smaller surge is seen at opposition elongation of 180˚. This opposition surge is a similar effect to seeing a glory in the atmosphere. 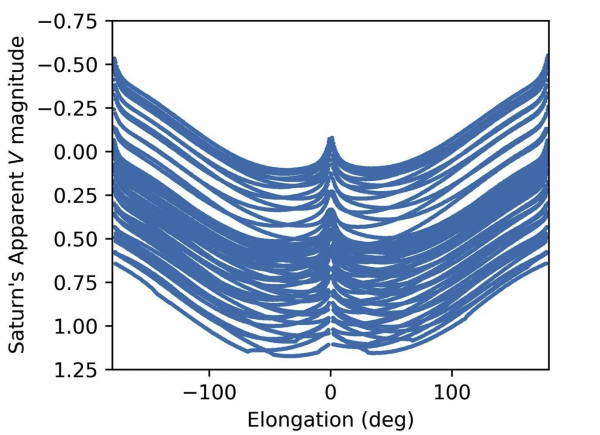 Being about half the distance as Saturn, Jupiter orbits 5.2 AU from the Sun. Earth’s orbit changes our distance from Jupiter between 4.2 and 6.2 AU causing a substantial change in magnitude. It has no significant ring system and also shows no signs of a surge in brightness at 0˚ or 180˚. 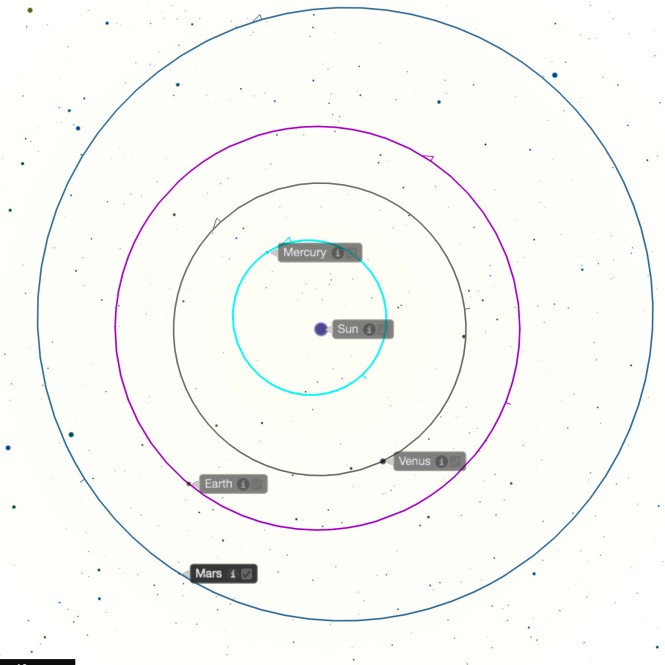 This planet orbits about one third as far from the Sun as Jupiter. Mars orbits at an average of 1.5 AU. Earth’s orbit changes our distance from Mars between about 0.5 and 2.5 AU. This big variation causes the brightness of Mars to vary over a wide range of several orders of magnitude. In addition, seasonal changes on Mars create polar caps which change the brightness of reflected light to the Earth. Dust storms can also have a similar small effect.

Mars is positioned with respect to Earth in three general ways as it orbits the Sun. Here we see it from the side as illustrated by this top view. In this perspective, we don’t see the fully illuminated face of Mars. It appears more like a waxing or waning moon. That decreases its apparent magnitude. 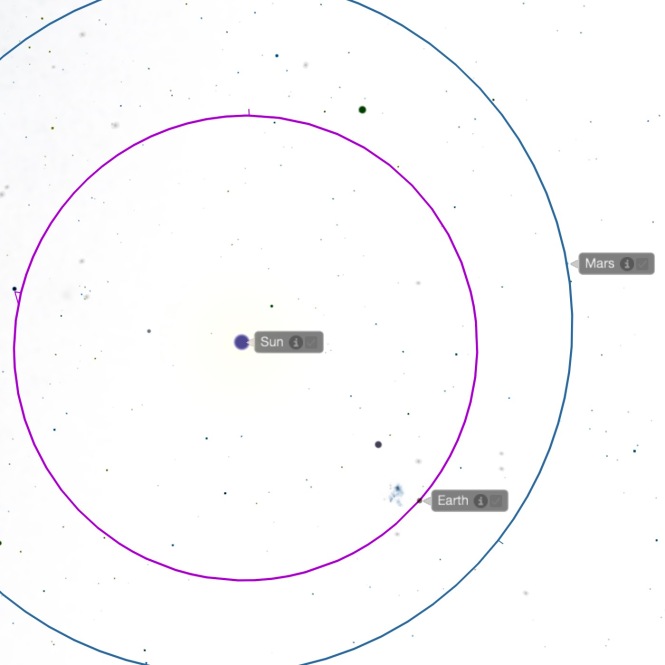 We can also see Mars relatively close to Earth in this orbit position. This is called opposition when elongation is 180˚.  It appears largest and brightest during this time. 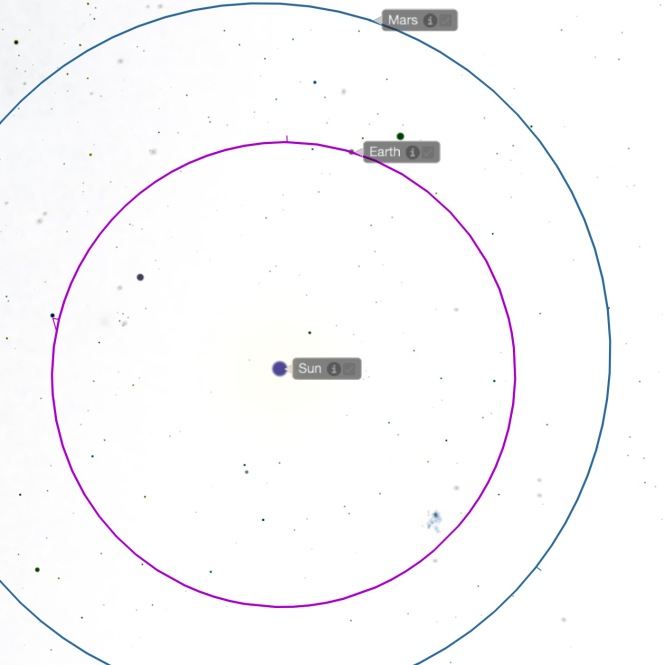 We see Mars farthest away when it appears aligned with the Sun during conjunction. It appears smallest and dimmest during this time.

Because of these widely different perspectives, the apparent magnitude varies a lot over time. There even exists a small surge in brightness depicted in the chart at 0˚ during conjunction.

Since the orbit of Venus is closer to the Sun than that of Earth, we never see it venture very far from the Sun. There is a limit to its elongation of about 45˚ as depicted in this orbit diagram. As with Mars, we don’t see the fully illuminated face of Venus when it is in this position. It appears as a crescent affecting its apparent magnitude.

Venus is positioned closest to Earth during this part of its orbit depicted below. It orbits the Sun faster than Earth and passes us. This is known as inferior conjunction. From our Earth point of view, the opposite side of Venus is illuminated thus causing the planet to appear much less bright. We see a thin crescent of the planet. 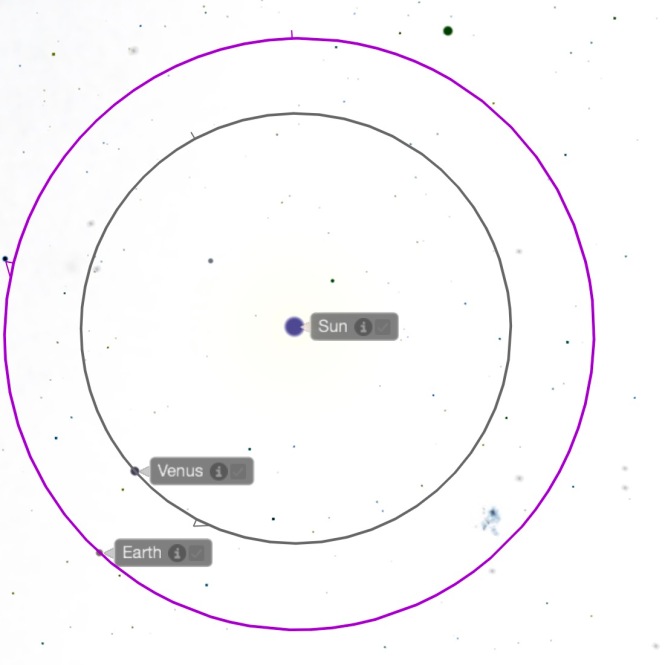 This image by Thierry Legault captures Venus only 2.4˚ from the Sun. Gases in the atmosphere allow a ring of light to be seen with Venus in silhouette. 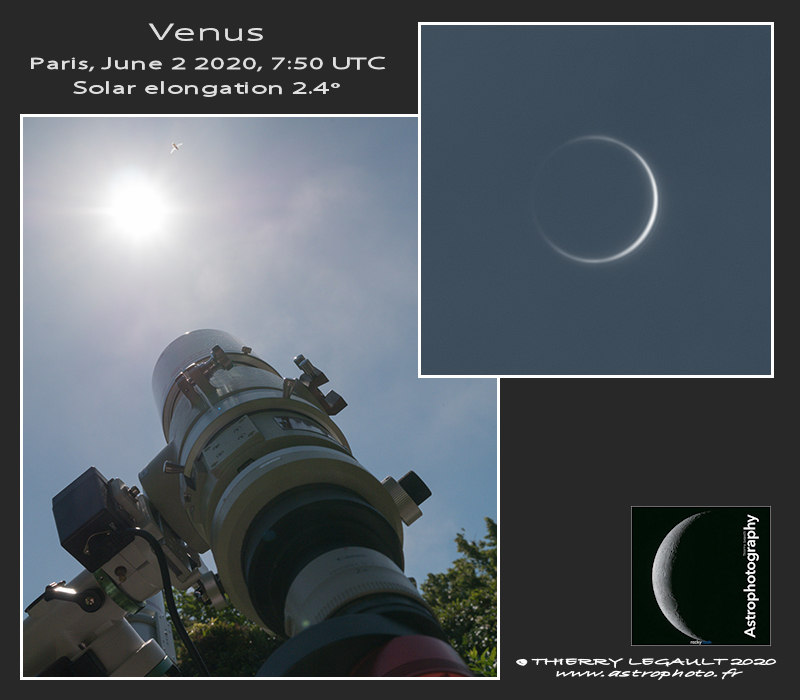 When Venus travels to the opposite side of its orbit and aligns again with the Sun from our view, this is called superior conjunction. We gradually see more of its fully illuminated face. But, it is also much father away resulting in an apparent magnitude of a nearly constant value during the weeks of superior conjunction.

Combining these effects of distance and phase angles gives us this interesting magnitude chart. The bumps at about 10˚ elongation are due to the gases allowing a ring as seen in the Legault image above. 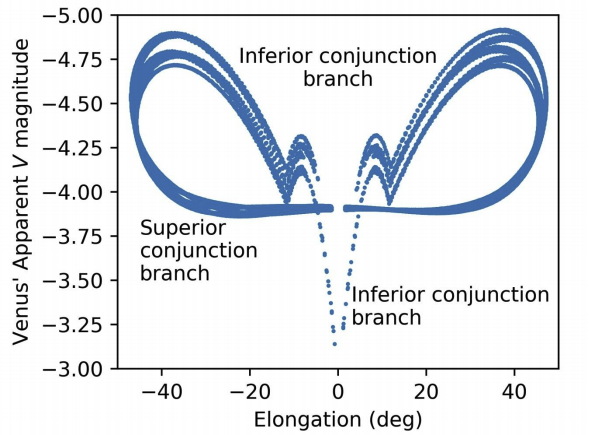 Last, but certainly not least, is the diagram of apparent magnitude for Mercury. Being the closest to the Sun of all the planets, it never wanders far. It is never seen more than 28˚ on either side of the Sun. And, it orbits quickly in 88 days. It presents phases toward Earth and the distance varies as it and Earth orbit. Diagrams are similar to those of Venus with respect to Earth except Mercury has a smaller orbit than Venus.

Mercury orbits at 0.4 AU from the Sun. Seen from Earth, Mercury varies in distance from us between 0.6 and 1.4 AU. The resulting diagram of magnitude versus elongation over a 50 year period of time has a unique shape and covers several orders of magnitude. Most people have never viewed Mercury even though it is a very bright object at times. One must look just after sunset, or just before sunrise, in order to see Mercury.

During inferior conjunction, Mercury is closest to Earth and aligned with the Sun. We don’t see the illuminated face of the planet. It has a very dim magnitude, if it is visible at all in the Sun’s glare. At superior conjunction, Mercury is farthest from Earth and again aligned with the Sun. We see the fully illuminated face at its brightest.

What generalizations can be made about the apparent magnitudes of the planets?