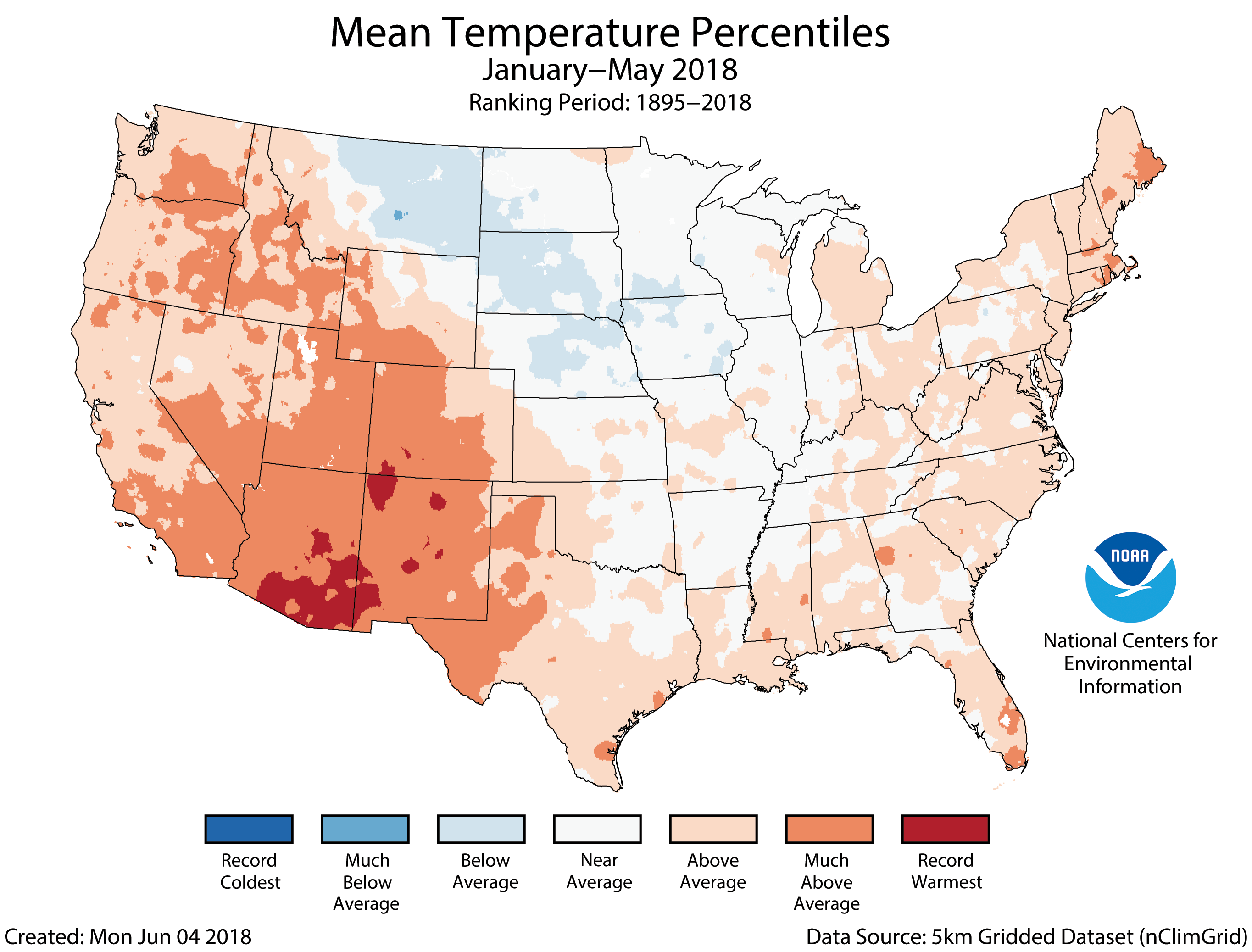 The eastern U.S. was wetter than average year-to-date. Pennsylvania, New Jersey, Rhode Island and West Virginia had top ten precipitation amounts. It was also true for parts of the Northern Rockies and Plains due mainly to snow early in 2018. Below average precipitation was recorded in the Southwest, Great Plains and Upper Midwest. Some areas were much below normals. 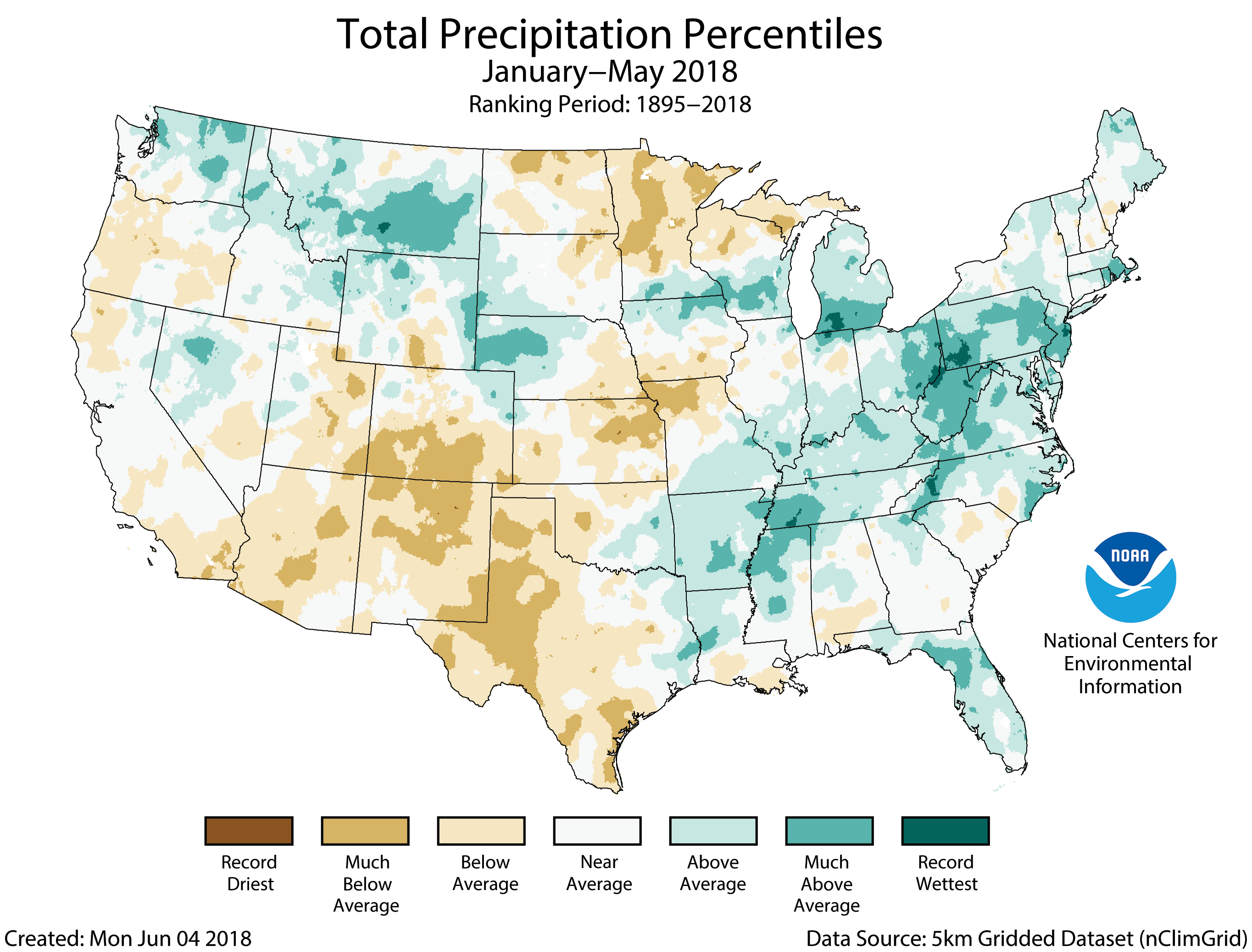 The full assessment report for April can be found here. Parts of it will be highlighted in this post. April was the 13th coldest on record for the contiguous states. It was the coldest since 1997. Several anomalies are noted in the following graphic. Regions had record cold, heat, rainfall, snowfall, precipitation, and drought. It was a wide ranging mix of conditions. Click to embiggen to see the details. 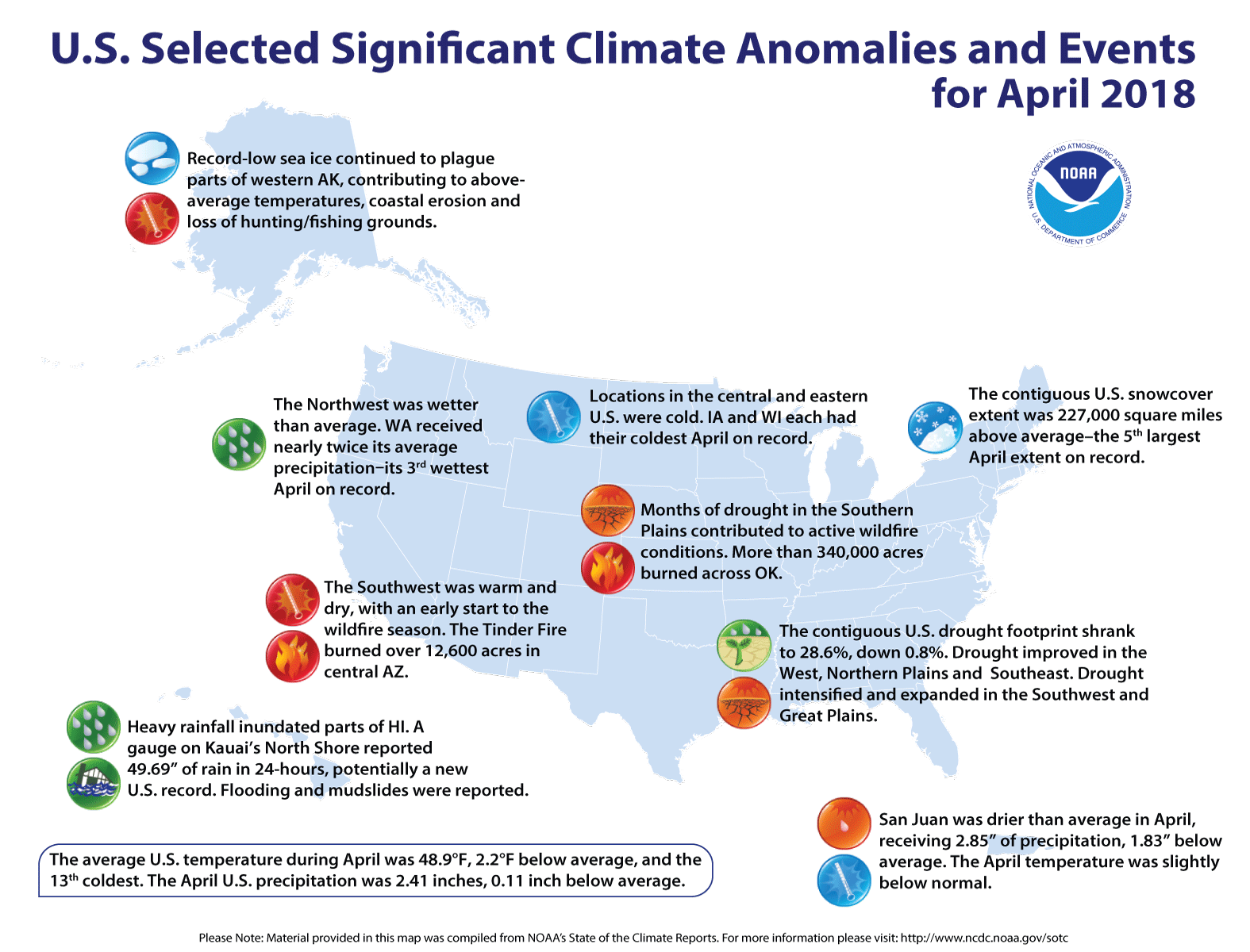 The eastern two thirds of the country was cold compared to the period from 1895-2018. The upper midwest was especially cold, setting records. We in Iowa thought winter was never going to end. It was our coldest April on record. We had several snowfalls. The southwest region on the other hand had record warmth. 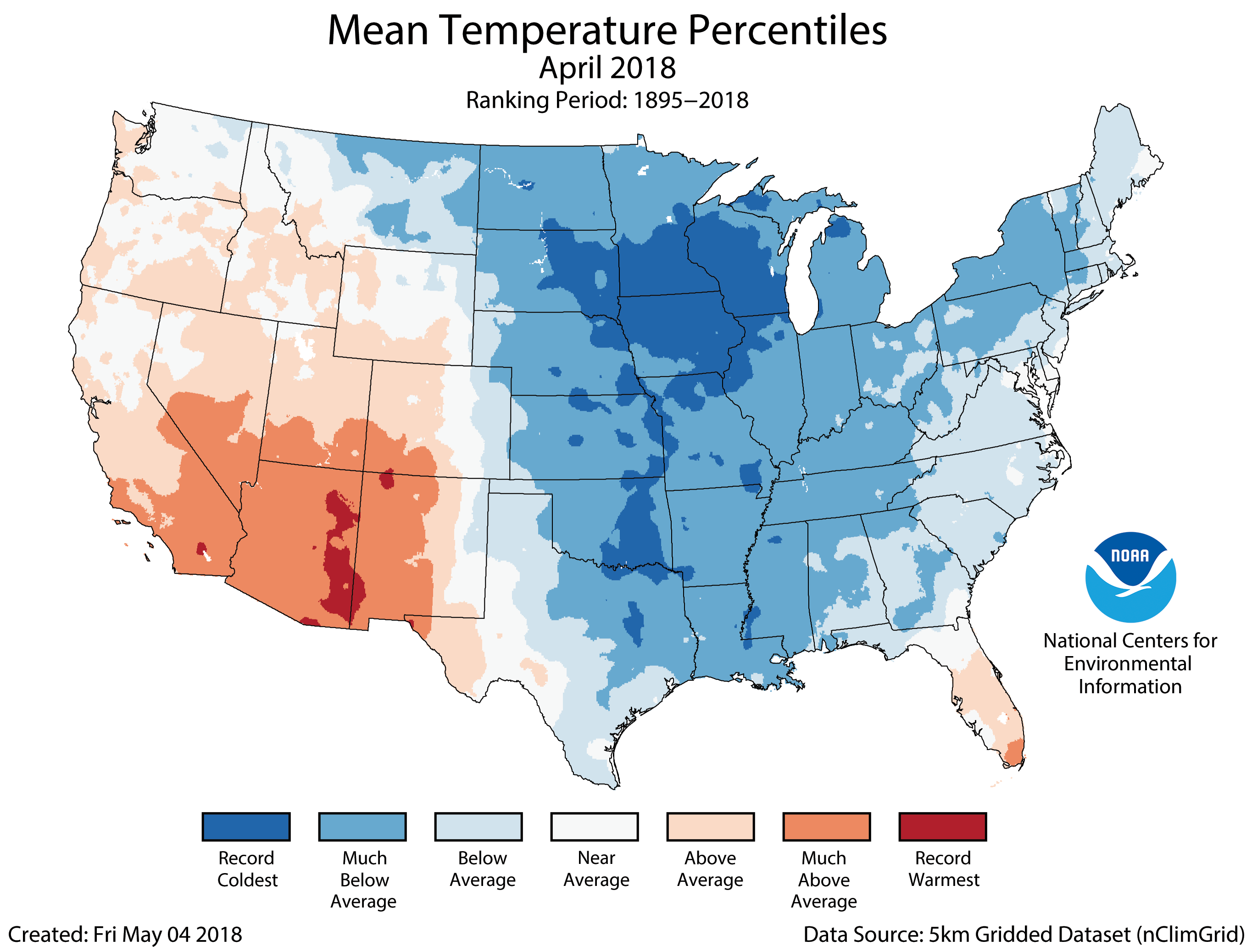 Large parts of the country received above average precipitation seen here in green. The southwest, Texas, and through the central states was dry. I mentioned above that Iowa had several snowfalls in April. Southeast Iowa shows record dry conditions for April. Our snows were very dry with high snow to water ratios. Concern is growing in the heart of the country about the drought conditions. 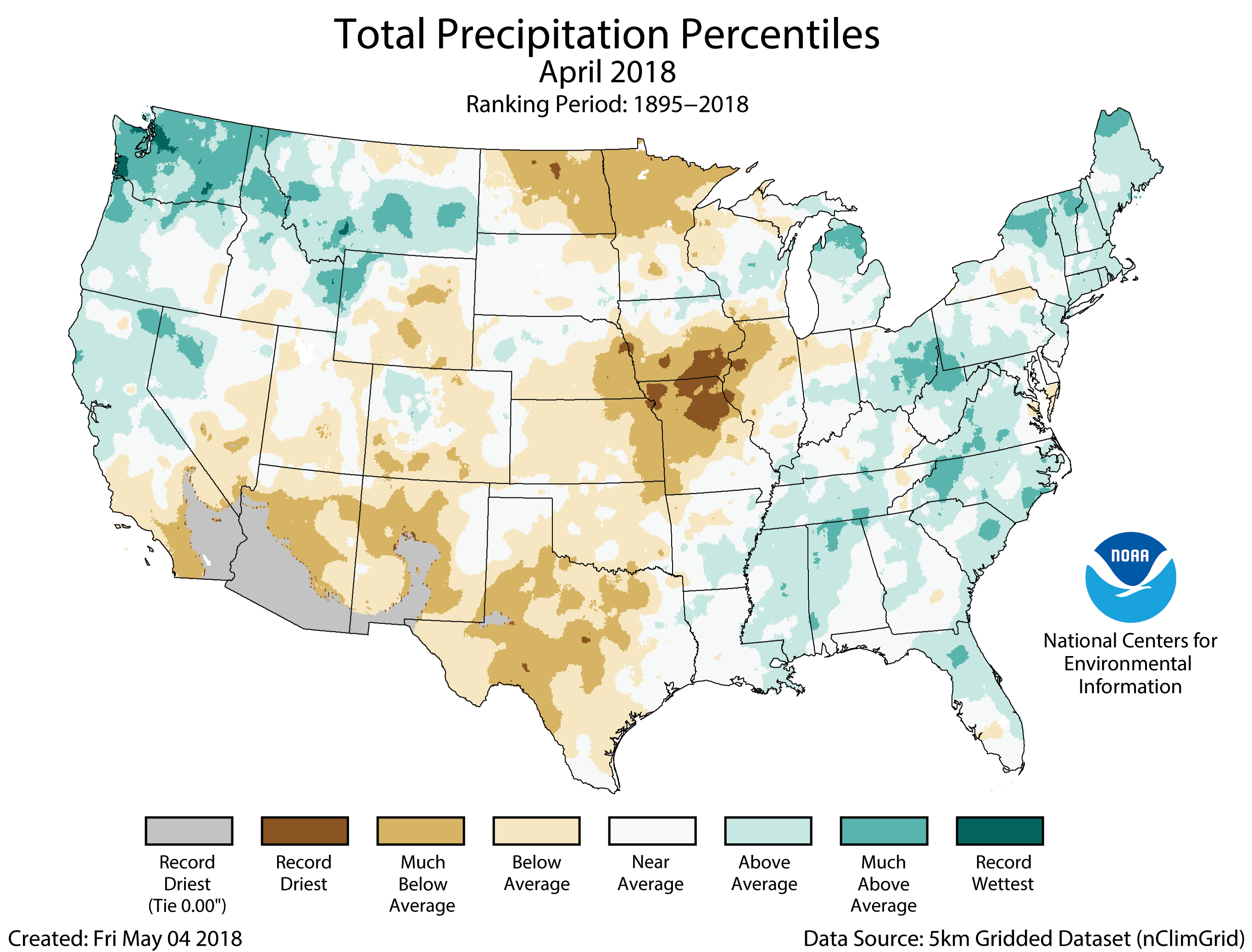 The full assessment report for May can be found here. As with April, several anomalies are noted in the following graphic. Click to embiggen. 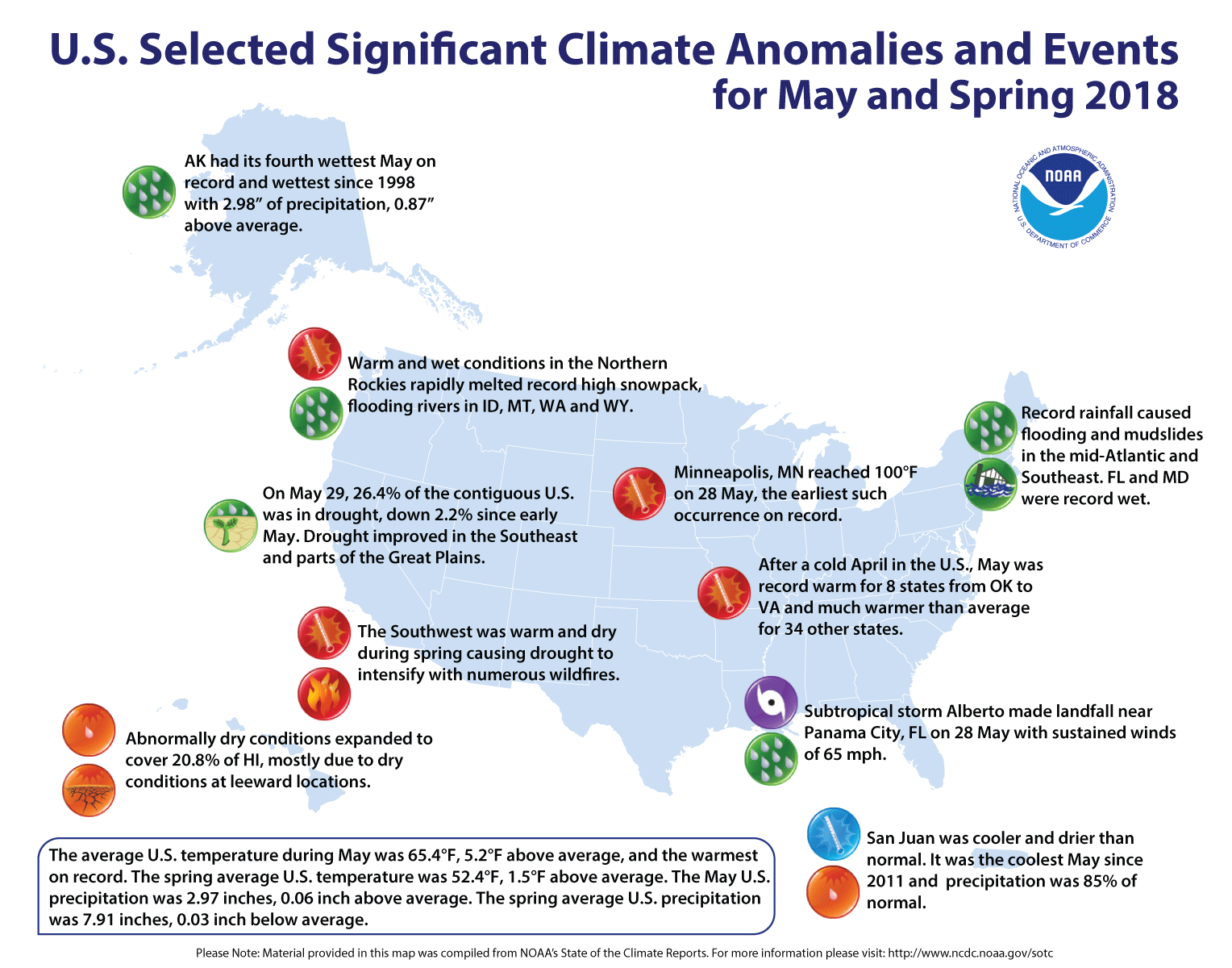 Record warmth for the May was set in the northwest and in a large swath across the central part of the country. Most of the rest of the country was much above average for May. The nationally averaged overnight low temperatures during May were 52.5°F, or 5.1°F above average. That is 2.0°F warmer than the previous record set in 1987.  Daytime highs set records. It was 100°F on May 28 in Minneapolis, Minnesota. That was the earliest 100˚F on record. 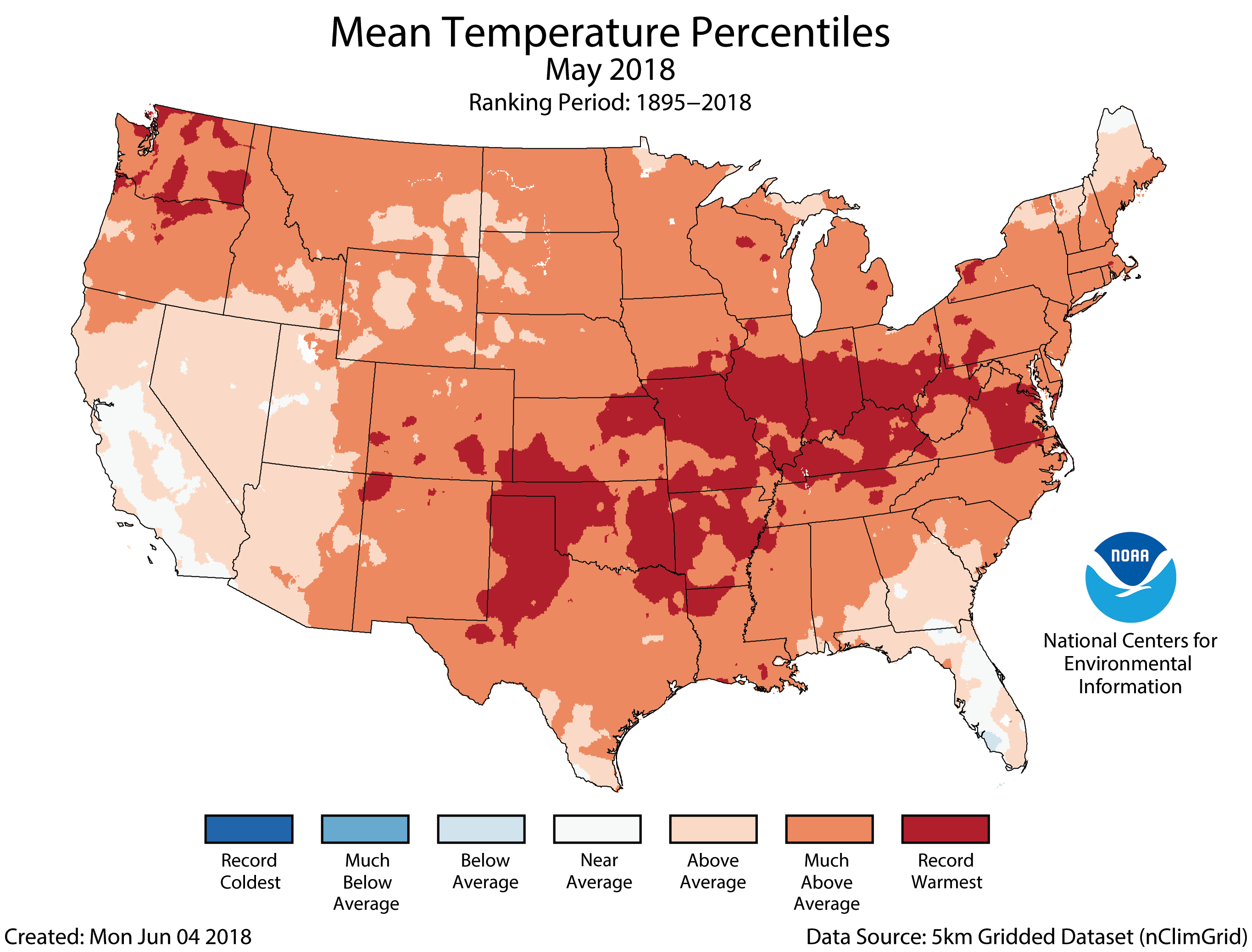 May brought record and near-record precipitation to the southeast and mid-atlantic states in connection with the early storm Alberto. Drought conditions persisted along the West Coast, Southwest, Southern Plains, the Northeast and parts of the Midwest. Warm temperatures caused flooding by melting the high snowpack in parts of Idaho, Montana, Washington and Wyoming. 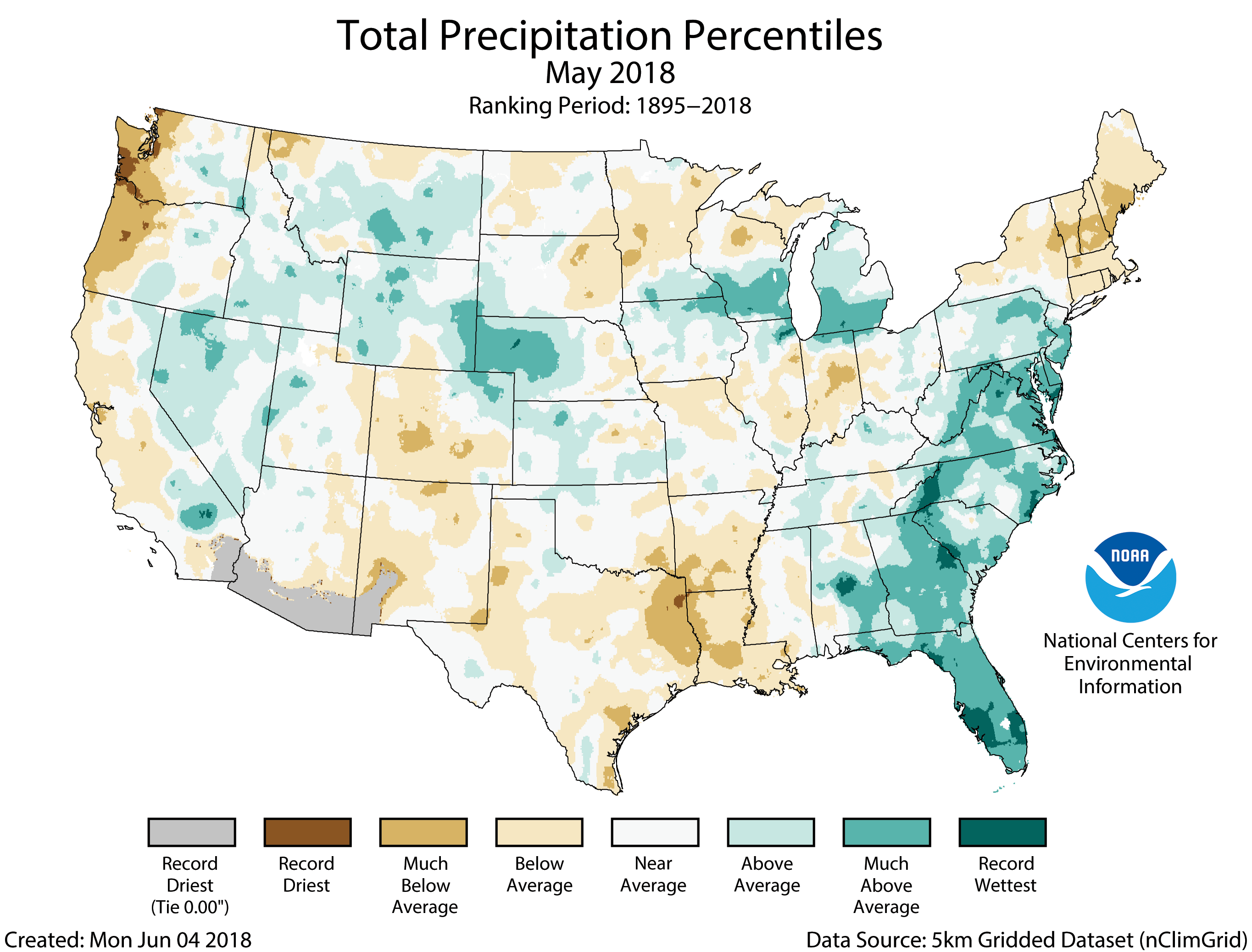 What will the summer months bring? That is not easy to predict. The NOAA Climate Prediction Center is charged with that responsibility. They issue a set of maps for the coming months based on input from a number of climate models. The predictions for June 2018 temperature and precipitation indicate much of the country will likely face above normal temperature. The contour line marked 70 around the A means there is a 70% probability that region will be above normal in temperature for June.

Precipitation expected in June varies around the country. The middle Atlantic and southeast have a 40% probability of above average precipitation. It is likely to be drier than normal in the areas marked B.