The previous visit by Comet Halley to our part of the inner solar system was in 1986. The time before that was in 1910. The next visit will be in 2061. I have not ruled out seeing it again.

The European Space Agency’s Giotto spacecraft flew within 600 mi (965 km) of Halley and through the tail in March 1986. The dimensions of the comet nucleus were seen as 15×8 km (9×5 mi) and shaped like a potato. Giotto confirmed the existence of organic matter and revealed the surface to be one of the blackest objects in space. Image enhancement was used to brighten the surface to reveal more detail in these fly-by images. Images are from ESA and affiliates. 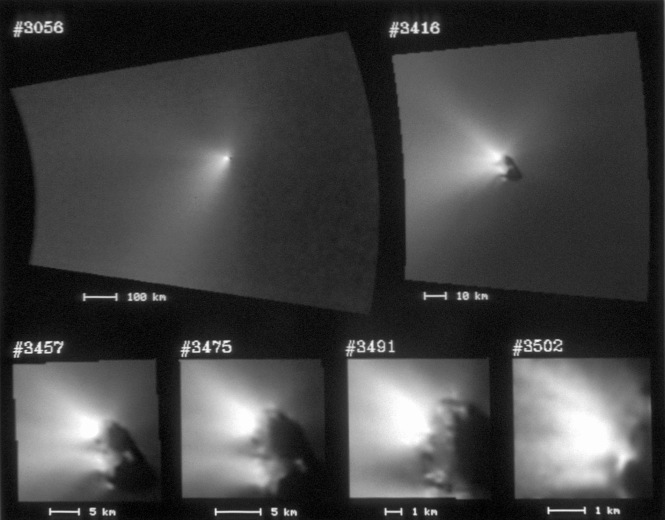 Some Images From Earth

I saw Halley with my own telescope in 1986 which showed it small, faint, and not impressive. Others in the world did capture impressive images. A few are highlighted in this video compilation from YouTube – source unknown. Notice the best images were from the southern hemisphere in the first part and last part of the video. Images from U.S. sites were less spectacular. Farther down in this post I will explain why. The apparition coming in 2061 will be well-placed for good viewing in the northern hemisphere.

The Orbit of Halley

This first view of Halley’s orbit looks down from above the solar system. The farthest and 8th planet in the view is Neptune. Halley at this time is farther from the Sun than Neptune. One full orbit takes about 76 years. Most of the time of orbit is spent far from the Sun as it slowly makes the turn. Halley spends 38 years falling toward the Sun. As a result, it speedily passes the Sun between the orbits of Mercury and Venus in only a couple of months. Also, notice the large eccentricity of Halley’s orbit.

All of the following videos are from the Jet Propulsion Laboratory Small-Body Database Browser. I put Halley into the search box in order to access the data, hit return, then chose 1P/Halley. Above the resultant tables of values is a link to Orbit Diagram. It is fun to play with it.

This next perspective begins with an oblique view, then zooms to the inner planets. Halley’s orbit is inclined quite a lot to the plane of orbits of the planets. It only emerges above the plane when it quickly goes by the Sun at perihelion. During perihelion is Earth’s prime viewing opportunity. During close approach, the heat of the Sun produces a majestic tail system shown in the images above. The gases and dust stream from the comet nucleus due to heating of the black surface.

I mentioned earlier that some apparitions of the comet have provided sky watchers better views than at other times. Let’s explore why that is the case.

The pointer notes the positions of Halley and Earth at the start of the video. The video stops at about 45 sec to show Halley at perihelion when it was closest to the Sun and solar heating caused the most activity and bright comet tails. It was above the grid plane but almost in line with the glare of the Sun as seen from Earth. Such an alignment was not a good viewing arrangement for either hemisphere.

By March 1986, Halley moved away from alignment with the Sun into a better position for Earth views. It also dived below the grid plane, resulting in poorer views for the northern hemisphere. It was well-placed again for the southern hemisphere viewers.

The next apparition of Halley in 2061 will present a very different scenario for viewers in the two hemispheres. The pointer again notes the positions of Halley and Earth at the beginning of the video. As time progresses, Halley rises above the grid plane and approaches perihelion. Earth is positioned ideally, especially the northern hemisphere. Earth and Halley quickly pass each other in opposite directions at a relatively close distance. Here are some viewing tips for the apparition provided by Robert C. Victor at the 2007 annual conference of the Great Lakes Planetarium Association. I hope you are young enough to see it.