Have you considered doing a DNA test? We both had our DNA tested in 2014 by 23andMe. The 23andMe results were interesting. We have thorough genealogy records for most of our family lines going back many generations. We knew what to expect from our DNA results.

My last name is derived from a variation of Raudenbusch near Stuttgart Germany. They came to Philadelphia in 1732 according to the ship manifest. The name was changed after a generation to avoid confusion with other Raudenbusch families who lived nearby. The French & German part of the chart below from 23andMe confirms that information.

They married into family lines that were British & Irish, my most recent ancestors in the timeline chart. The results also showed distant generations from Africa making up a very small part of my DNA. My records show distant relatives on my mother’s side from South Carolina who owned slaves in the late 1700s. The genetic link from 23andMe isn’t a surprise. 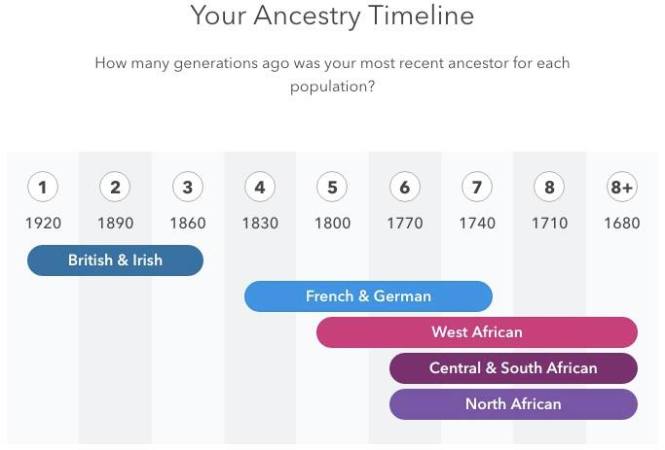 The 23andMe process was simple. A saliva sample was collected into a plastic vial from the kit. It was mailed to the testing company. We received an email soon after they received it telling us it had arrived. When testing was finished, an email told us how to set up our accounts to log-in and view results.

Results are categorized on the we site into the following areas. The numbers after each state how many reports are available to view based on my analysis. Those numbers might vary per person. The areas are accompanied by charts and explanations on the web site. Most are reasonably simple. I can delve more deeply into the science by following links provided on the web site.

Ancestry – 5 reports of my ancestry as 86% British-Irish. That agreed with my records.

Genetic Health Risk – 6 tests for variants that might cause me future concern such as Parkinson’s, Macular Degeneration, Late Onset Alzheimers, etc. None had high probability.

Wellness – 8 tests state how my diet and lifestyle might interact with my DNA. Does my weight tend average, caffeine effects, alcohol response, sleep patterns, etc.

DNA Relatives – 1199 people share a small % of DNA in common with me. A few are as close as second cousins. Most are third and fourth cousins or more distant.

Research – 31 scientific surveys conducted by non-23andMe companies. I volunteered to answer questions so they can study how my DNA is correlated to other factors of health and cognitive performance. These are all voluntary and anonymous.

Some people are concerned about whether they want to know about results of genetic tests. What if I am a carrier of a trait? Will I pass it along to my children? Am I likely to develop a genetic disease when I am older? Do I want to know?

The company understands those concerns. Before choosing whether to go ahead, you can read about the concerns starting with this link to the site. Results of tests are not a conclusive diagnosis. Results can and should be discussed with your doctor.

Behind The DNA Tests

I love science and follow people who make it fun and interesting. Destin Sandlin is one of those people. He has a YouTube channel called Smarter Every Day. He posts the most amazing videos testing the science of a wide range of topics and events. In a recent video, Destin and his wife wanted to know more about the testing laboratories used by 23andMe. They had concerns like anyone else. They contacted 23andMe for permission to record and ask questions and were given full access. Many questions you might have about DNA testing are answered by this video.

I hope this post helps you decide whether to go ahead with genetic testing. There are several good companies from which to choose. They each offer their own unique set of results. Here is a list of many from Wikipedia. Here is a review of three of the most popular ones.