Latest just before flyby of Pluto in color posted on Twitter by Alex Parker. 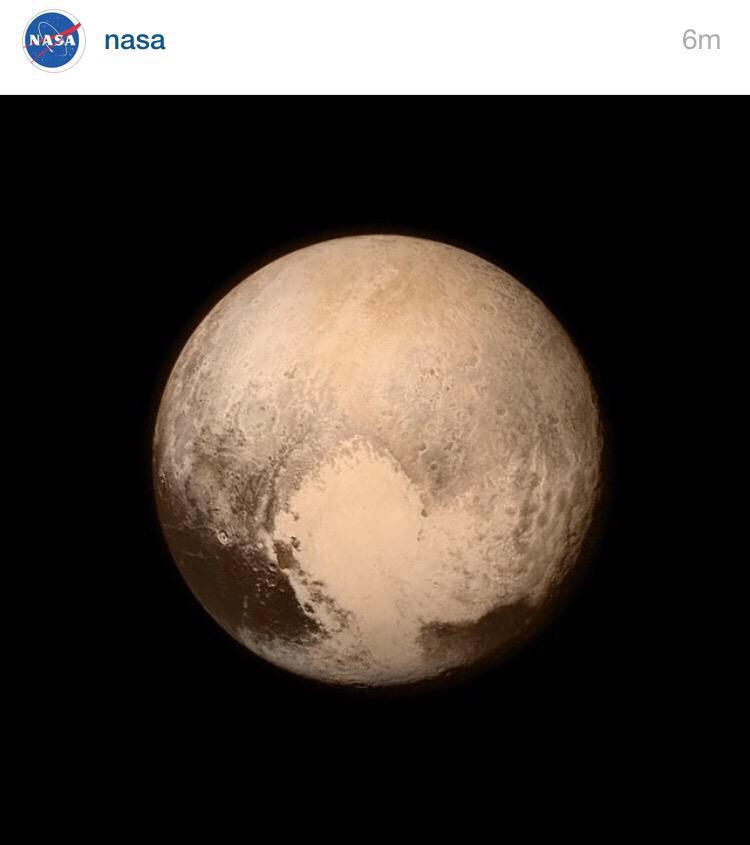 It has been 85 years since the discovery of Pluto by Clyde Tombaugh in February 1930. It was but a tiny speck of light on glass photographic plates. Tombaugh systematically imaged a region of the sky in pairs of photographs. For hours on end, he studied the pairs to see if any objects shifted position. He used a blink comparator to quickly shift views of each of the plates. If any objects changed position, the blinking created the illusion of movement.

Pluto remained a speck of light until the Hubble telescope images revealed it with some hints of varying patches of color as in this highly processed image. This was the best view until now.

Humanity is finally getting a detailed closeup look at Pluto and its largest moon Charon thanks to the fly-by mission of the New Horizons spacecraft. A recent image from 8 July 2015 gives tantalizing clues to what will be revealed. Pluto is on the right in this image. As the spacecraft passes Pluto, the speed will be nearly 14 km/sec (8.7 mi/sec). A rapid sequence of events is programmed into the spacecraft computers. Control cannot be done from Earth. The round trip travel time for signals is 8 hr and 50 min. Data will be returned later.

Pluto shows more detail in this image taken on 11 July 2015.

Launched 19 January 2006, New Horizons departed Earth, then made a slingshot fly-by of Jupiter to gain speed and change course. The speed gained cut the travel time to Pluto by three years. It has been coasting toward this encounter with Pluto since the Jupiter fly-by in February 2008. This 2 minute video highlights parts of the journey.

Stay up to date on the status of the mission with this link to the New Horizons site. There is a link to the current position updated with each visit.

What time of day on Earth would compare to noon Pluto Time? In the link, follow Use My Location on Earth and it returns a time of day for you.

Clyde Tombaugh died in 1997. Some of his ashes are on board the spacecraft along with several other interesting stowaways. A plaque states the following:

Next For New Horizons

Over the next few weeks, the spacecraft will return data to Earth gathered during the rapid fly-by. After that, the mission sets sights on visits to Kuiper Belt Objects in the region beyond the orbits of Neptune and Pluto. KBOs are ancient icy bodies which are remnants of the early formation of the solar system. We hope to hear from New Horizons in the future as it looks at our past.