Part 2 | The Eclipses of Io

In this post, the speed of light is successfully measured by timing a chopped light beam between two distant mirrors.

The first measurement of time for light to travel a large distance was announced by Ole Christensen Rømer in 1676. His work involved the travel of light across the diameter of the Earth’s orbit. It was an inferred travel based upon knowledge of celestial motions of Earth and the closest moon of Jupiter named Io. He did not set out to directly measure light beams as they made that journey. Instead, he was measuring something different and made his discovery by accident.

In this post, we see how the speed of light was calculated from direct measurements of a light beam intentionally sent from one place to another and back after reflection from a distant mirror. Armand Fizeau conducted the experiment in 1849. 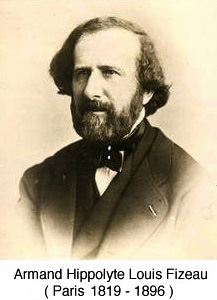 Details of his biography are here. Fizeau was born in Paris. His father was a medical doctor and professor of pathology. It was assumed Armand would continue in the tradition of his father and previous relatives. He enrolled at Collège Stanislas in Paris. There he became a good friend with fellow student Léon Foucault. Both men made important contributions in several areas of science. Armand did not enter the medical profession. He did start attending the Paris Medical School but quit after suffering from headaches and migraines.

In 1839, Fizeau and Foucault attended a lecture by Louis-Jacques Daguerre on the new photographic process. Daguerre exposed a photographic plate to a window using his camera. He talked for 30 minutes before using a variety of chemicals to develop the image. Fizeau and Foucault were impressed. But, they felt the process should be speeded up so human subjects didn’t need to sit still for so long. They were able to reduce the time to 20 seconds.

In 1845, he and Foucault were asked by Arago at the Paris Observatory if they could obtain images through a telescope using the new process of photography. They were very successful and produced the first image of the Sun through a telescope which included groups of sunspots.

Fizeau also proposed in 1848 an explanation for the shift in wavelength of light from a moving star. This was what we now call the Doppler Effect. He was unaware of the previously published work by Christian Doppler in 1842.

Arago at the Paris Observatory suggested Fizeau try to measure and calculate the speed of light between two places on Earth. Fizeau chose two high ground locations, his parent’s home in Suresnes and Montmartre on the right bank of Paris. They were 8633 meters apart. He planned to direct a bright light across the distance to a flat mirror so it was reflected back for him to see. That should be simple enough in principle. But, light can cover that round trip of 17266 meters in less than 0.00006 seconds. How could he possibly time something that fast? He decided to use a spinning toothed wheel to chop the beam into segments.

Consider a toothed wheel like this with a flashlight beam pointing at it. The wheel is not turning. The beam and teeth are situated so it passes through the gap. If a mirror was placed in the distance, it could be positioned so a reflection could be sent back through the tooth gap to be seen by the operator. These toothed wheel models are my modifications of one by Google SketchUp user hamdi40. 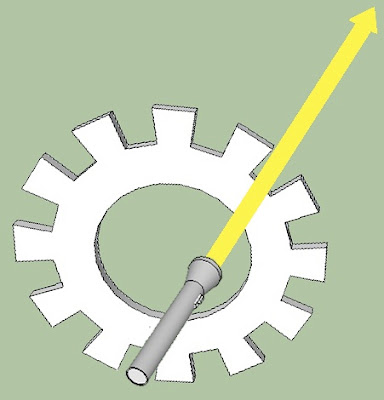 Suppose the wheel is rotated slightly so a tooth is in the way of the beam and blocks it. That would prevent the beam from reaching a distant mirror. 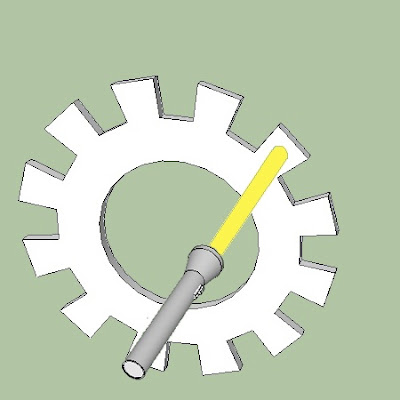 Fizeau understood that if the toothed wheel was spinning slowly, it would chop the light beam into long segments. The segments would be able to travel from his parent’s home to Montmartre and back. 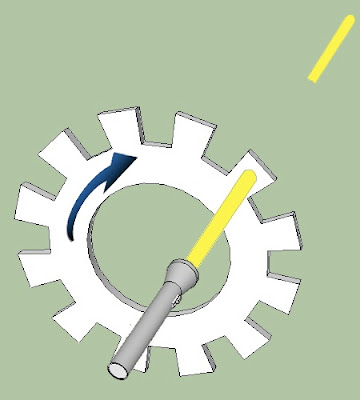 The challenge was to get the segments chopped at such a high rate so a segment would go to the mirror and back in the time it took for one tooth gap to be followed up by the next gap of the rapidly spinning wheel. He would need to spin at a high rate of speed and have a wheel with many teeth in order for the time between gaps to be sufficiently quick. Remember, the travel time was on the order of 0.00006 seconds. 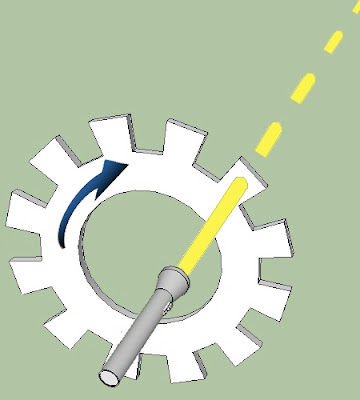 Here is an illustration from a publication by Project Gutenberg called The Story of the Heavens, by Robert Stawell Ball. This text says the illustration is from Simon Newcomb’s Popular Astronomy in 1878. It is not the actual toothed wheel Fizeau used. But, it does illustrate the concept in a schematic way. 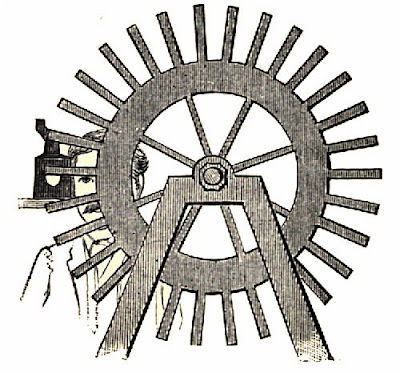 From the Paper by Fizeau

The actual paper published by Fizeau is in French. A fellow blogger, Skulls in the Stars, posted in 2008 some details about Fizeau’s attempt to do this experiment and how it related to principles of relativity. He followed with a post supplying the text both in French and translated English of Fizeau’s original paper. I am grateful that he found the paper and did the translation.

The illustration above by Newcomb shows a black optical device in front of the observer. A bright, narrow beamed light source was directed into the optical device. It contained a partially silvered mirror oriented at 45˚ to the direction of the light beam. Such a half-silvered mirror would allow it to both reflect light and transmit light. The observer could also see through the mirror in the device.

The toothed wheel used by Fizeau had 720 spokes, or teeth. It was rotated by a clockwork made by Froment. During operation, light shined into the optical device, and was diverted by the 45˚ half-silvered mirror toward the toothed wheel. If the wheel spun slowly, the light would pass through a gap between teeth, travel to the distance mirror 8633 meters away, return, and be blocked from visibility by the next approaching tooth of the wheel.

When the wheel was spun faster, the light would traverse to the distant mirror and back in the same time it took for the next gap between teeth to move one 720th of a rotation. The returned light would pass through this gap, through the 45˚ half-silvered mirror, and into the observer’s eye as a bright spot of illumination. Fizeau found the rotation rate of 25.2 rev/s allowed him to see a bright spot of illumination.

In that time, light traveled 17266 meters to the distant mirror and back.

Fizeau was only about 4% in error. That is quite a remarkable result.