Joel 2:31: “The sun shall be turned into darkness, and the moon into blood, before the great and the terrible day of the LORD comes.”

That is an ominous sounding excerpt from the bible. Does it have anything to do with the coming lunar eclipse early in the morning of April 15, 2014? The Moon will probably appear red during the totality part of the eclipse. That is about the only thing. Don’t worry about an impending apocalypse. So, why is this lunar eclipse drawing special attention?

What is a Lunar Eclipse?

These occur when the full Moon passes through the shadow of the Earth. It happens on average a couple of times a year. Earth is positioned between the Sun and the Moon. This brief 2 minute video from the folks at the Goddard Space Flight Center will illustrate the mechanics of a lunar eclipse.

As you may have noticed, the Sun is not turned to darkness during a lunar eclipse, at least for us on Earth.

What is a Tetrad?

This total eclipse will be the first of four consecutive total lunar eclipses within the next two years. That is why a tetrad is so special. It has been almost 10 years since the fourth one of the previous tetrad. The next tetrad will not occur until 2032. See table. Let this 4 minute video from Science at NASA explain more about this idea.

All four total eclipses of this tetrad will be visible in North America. That is particularly unusual. Normally, the four would be visible from four different regions of the earth.

What Shall I look For?

The following diagram shows the orientation of the Sun, Earth with shadow, and Moon during an eclipse. It is not drawn to scale. There is a faint portion of the shadow forming a ring called the penumbra and a smaller darker shadow region called the umbra. Anywhere in the penumbra, one could look from the Moon and see part of the Sun near the Earth. Anywhere in the umbra, one would see the Sun entirely blocked by the disc of the Earth. The umbra is the area where a total lunar eclipse occurs. A partial eclipse occurs if the Moon is in the penumbra. 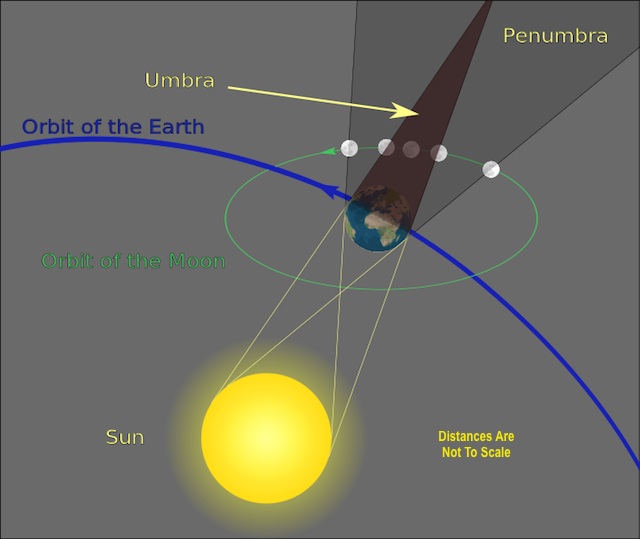 My desktop planetarium software allowed me to make this 1 minute video of the passage of the Moon into the shadow of the Earth. The actual events depicted in the video take about 5 hours start to finish.

When Shall I Look and Where?

The eclipse will be visible in North America, Central America, and the western part of South America. It will be high in the southern sky. It takes a long time for the entire sequence. There is no rush to see a brief event. The only problem is the time of the night. I live in the central time zone of the U.S. The umbral phase, when totality nears, starts at about 1:00 AM. Totality begins at 2:07 AM and ends at 3:25 AM. Mid-eclipse, when the moon should be reddest, is about 2:45 AM. Those are not convenient hours to be outside watching the sky. But, if the sky is not cloudy, I will probably make the effort to witness it. This is not something one sees often. Here are the times for the other time zones of the country. 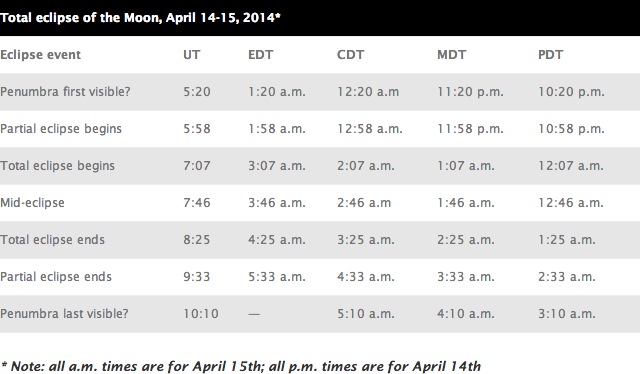 This week Mars is closest to Earth during its orbit. It rises a little before the Moon on the night of the lunar eclipse. It will be very bright and to the upper right of the Moon during the eclipse. Many amateur astronomers are viewing Mars at this time of closest encounter with Earth. Many details are visible such as the polar caps, clouds, and seasonal dust storms. This image is by Fabio Carvalho and Gabriela Carvalho was obtained using a high-speed digital camera and 16-inch diameter telescope from Assis, Brazil. It appeared on the award winning site Astronomy Picture of the Day. Click the image for their url and explanation of the image. 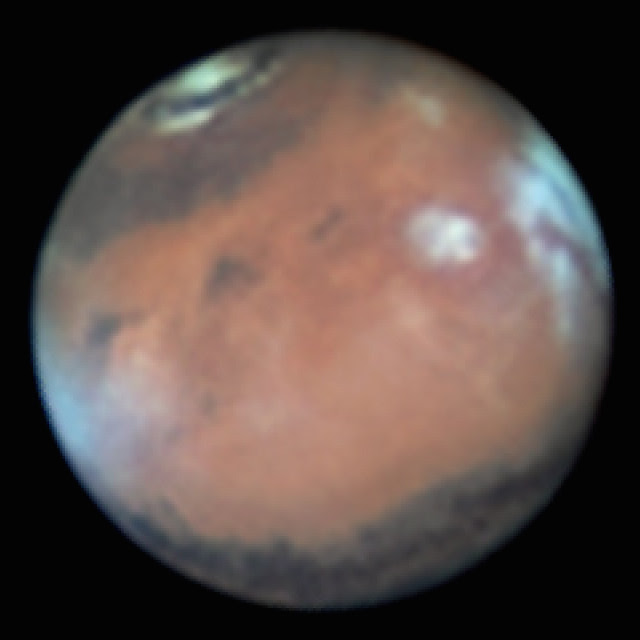 What do you think? Are we in danger of the end as suggested by some? There are many web sites claiming bad things will happen. I am not linking to any. Google search on your own if you want to read them.

I don’t think we have anything to fear. This natural event has happened many times before. It will do so for millennia to come. I hope your skies are clear and you get up to see it. If you don’t plan to watch the entire phase of totality, at least take a look during it. It will be an awesome sight.

28 thoughts on “Lunar Eclipse | First of a Tetrad”