If you look at the timeline of missions to Mars, you might notice something interesting in the dates of the launches. They occur only about every two years, actually about 25-26 months. The next NASA mission to Mars is scheduled to launch November 18, 2013. It is called MAVEN. The previous launch to Mars was the Curiosity Rover of the fabulously successful Mars Science Laboratory in November 2011. This post will explain why launches to Mars only occur at certain times called Launch Opportunity Windows.

Earth is in a smaller orbit around the Sun, and is going faster, than Mars. About every 25 or 26 months, Earth orbits the Sun and catches up to Mars. It is when Earth is approaching Mars that we are nearing our closest distance with each orbit. It is more economical and takes less time for a spacecraft to reach Mars when it is launched during this approach phase. This short video will give you an idea of this catching up perspective. It is when we are approaching Mars that we have the few weeks of opportunity to actually launch in the correct direction and with enough speed to reach Mars.

During this window of time, missions must be ready to execute their launch. If they don’t succeed, there is another wait until the next opportunity arrives. In this case, it would be over two years before Earth orbits far enough to catch up to Mars again. Launch windows come at different times and durations depending on the mission. Windows to rendezvous with the Space Station are short when the station passes over a launch site.

Earth moves an average of nearly 30 km/s with respect to the Sun. Mars moves about 24 km/s. Rocket engineers use this extra 6 km/s to their advantage to help get the spacecraft to coast in a transfer orbit away from Earth and toward Mars. The rocket coasts in an independent orbit with respect to the Sun which intersects the orbit of Mars in about 8 months of time. Here is an example. There might be two or maneuvers by the engine onboard the spacecraft to slightly adjust and fine tune the path. 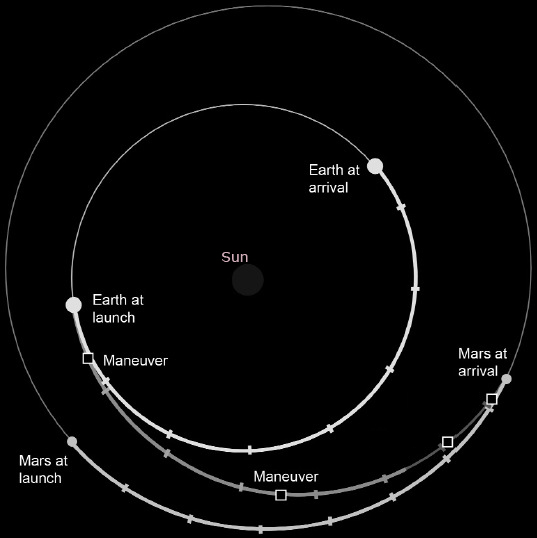 Rockets need to reach a speed of about 8 km/s (5 miles/s) in order to place a spacecraft into a low Earth orbit. To escape Earth orbit and coast to another place in the solar system, the rocket must reach a speed of about 11 km/s. The time that the spacecraft achieves this 11 km/s speed will determine the direction it will travel in the transfer. It is a lot like riding a merry-go-round and you want to toss a ball to a friend who is walking around the ride in the same direction as you are going. Your merry-go-round of Earth is not sitting still. It is moving. There is a relatively short time when you can actually toss the ball to the person so they can catch it. At other times, you are too far away or going in the wrong direction.

For example, back in 2011, the Mars rover Curiosity was approaching Mars as Earth rounded its orbit. On each of 24 possible launch days, Florida was moving in the right direction for launch to occur and get Curiosity moving toward Mars. Each day’s window happened in the afternoon Cape Canaveral time and was less than 2 hours long. See below. Weather, equipment, etc, could cause a delay to the window of the next day or later. Launch windows for reaching the ISS are a matter of minutes long as it passes overhead. 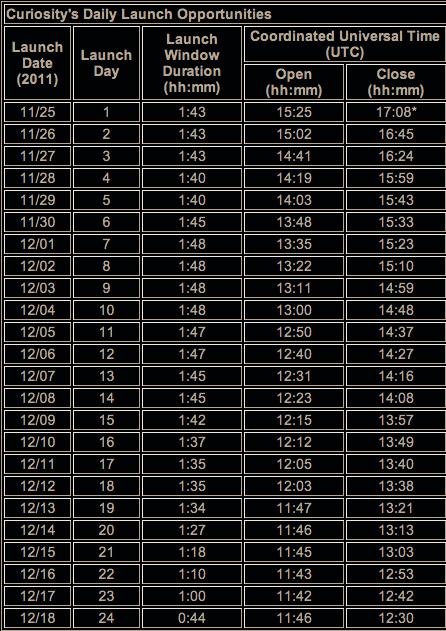