The most complex ground-based astronomy observatory, the Atacama Large Millimeter/submillimeter Array (ALMA), has officially opened for astronomers. When completed, it will consist of 66 steerable and coordinated radio wavelength telescopes. They will look at the part of the electromagnetic spectrum between infrared and short radio wavelengths. Until now, this part of the spectrum has been difficult to view from Earth. The wavelengths are blocked by the atmosphere and water vapor. This telescope array, at 5,050 meters, sits above 49% of the atmosphere’s pressure and 95% of the water vapor found at sea level. Images will be up to 20x sharper than previous ones at this wavelength. They will also be up to 10x sharper than the visible images of Hubble.

More details are below, in the November 2013 edition of Sky & Telescope magazine, and in this March 2013 article from the S&T website.

The first released images in 2011 from a few of the telescopes reveal a view of the Universe that cannot be seen at all by visible-light and infrared telescopes. Scientists worldwide want to be the first few researchers to explore some of the darkest, coldest, farthest, and most hidden secrets of the Cosmos with this new astronomical tool. The appropriately named Antennae Galaxies below are a pair of distorted colliding spiral galaxies about 70 million light-years away. This view combines ALMA observations, in two different wavelength ranges, with visible-light observations from the NASA/ESA Hubble Space Telescope. The orange blobs to the lower left and upper right are the two cores of the original colliding galaxies. The two galaxies are dotted with brilliant blue star-forming regions surrounded by glowing hydrogen gas. The hydrogen appears pink in the image.

Below is the Hubble optical version. For a sense of scale, follow this 1 minute video link. The two spiral galaxies started to fuse together a few hundred million years ago. The Antenna galaxies are the nearest and youngest example of a pair of colliding galaxies. You will see them at the 20 second mark in the video. 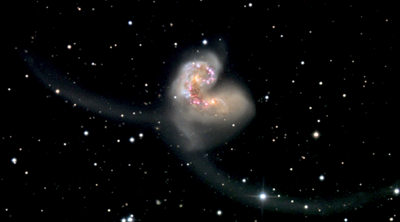 ALMA’s origin dates back to the end of the last century. Millimeter and sub-millimeter radio telescopes were studied in Europe, North America and Japan. Possible observatories had been discussed. The ambitious projects could hardly be realized by a single community. The first agreement was signed in 1999 by the National Science Foundation and the European Organization for Astronomical Research in the Southern Hemisphere. It was followed in 2002 by an agreement to construct ALMA on the Atacama plateau in Chile. The ALMA antennae will be located at the Altiplano de Chajnantor, a plateau at an altitude of 5,050 meters. The Atacama Desert is considered as one of the driest places on Earth with an area of 181,300 square kilometers. The desert is enclosed to the East by the Andes. To the West lies a secondary mountain range of the Andes. The dryness, high altitude, nearly non-existent cloud cover, and lack of light pollution and radio interference make it one of the best places in the world to conduct astronomical observations. 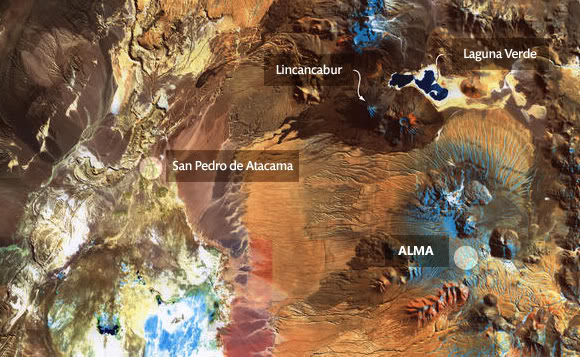 Japan via the NAOJ (National Astronomical Observatory of Japan) set its participation in the ALMA project. NAOJ will provide four 12-meter diameter antennas and twelve 7-meter diameter antennas. ESO, the NSF, and the National Institutes for Natural Sciences (NINS, Japan) jointly signed in September 2004 and amended the agreement in July 2006.

Interferometry and Areas of Study

The principle of interferometry is used by the telescope array to produce images of very fine resolution. The basic notion of interferometry is quite simple. A signal from the sky is captured by two or more antennas. The signals from each antenna are combined electronically. By combining the radio waves collected by many widely spaced antennas, the images look as if they were obtained from one giant telescope or antenna. The wider the aperture of a telescope, the finer the resolution of details that can be seen. In this case, 66 widely spaced 12 meter wide radio telescope antennas will simulate a single antenna 14,000 meters in diameter. An antenna that size is technically impossible. Several small antennas with combined output is far more feasible. Click on the image below for additional details about the interferometry technology. 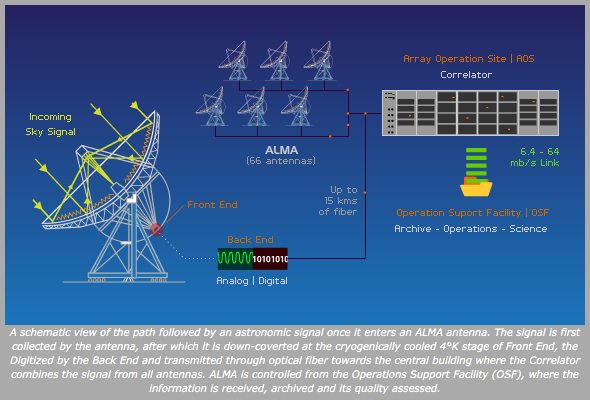 Most of the deep field galaxies that will be detected in ALMA images will have large redshifts. High redshift galaxies are more distant. The dominant emission from their warm dust is redshifted into the ALMA frequency bands of millimeter and sub-millimeter.

ALMA will be able to detect the signature of protostellar collapse on solar-system size scales. Star formation involves gravitational collapse. But, these motions forming a new star have not been seen. To observe them requires high spatial and velocity resolution and high sensitivity. ALMA has these characteristics. ALMA will study the objects and processes involved in star formation mapping parent molecular clouds from which stars form. It will allow the study of smaller structures, including protostellar fragments, outflows, disks, and protoplanets.

The Atacama Large Millimeter/submillimeter Array (ALMA) will allow scientists to determine the radius and the rotation of stars and identify the chemical composition of dust being emitted from red supergiant stars (a star which is 10 to 1,000 times the diameter of our Sun, such as Betelgeuse).

ALMA will observe a wide variety of phenomena on the Sun:

Radiation at mm and sub-mm wavelengths is caused by different mechanisms than radiation produced at longer and shorter wavelengths. Its source is in different regions of the solar atmosphere. This will be a new probe of physical solar processes.

Syzygy With the Nazca Lines 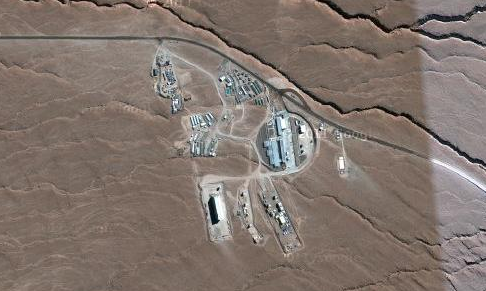 As I browsed around the ALMA web site gathering information for this diary, I was looking at aerial photos of the grounds to be used for the Operations Support Facility and antenna positions. This image is of the OSF. The OSF will be the central location for running the observatory and taking care of all maintenance and operations aspects. During the operations phase of the observatory it will be the workplace of the astronomers and of the teams responsible for maintaining proper functioning of all the telescopes. The image below is the site of the antenna placements. It is not in the same location as the OSF. There are many different configurations possible for the layout of the moveable antennae. That requires the elaborate road arrangements to move them when needed. 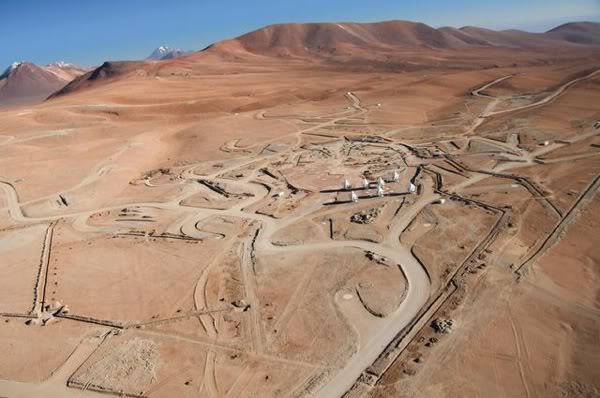 I felt as though I had seen similar pictures from South America before. Then, it dawned on me. It was the Nazca plain in Peru north of Chile and the famous lines and renderings of spiders, hummingbirds, and geometries on that plain. 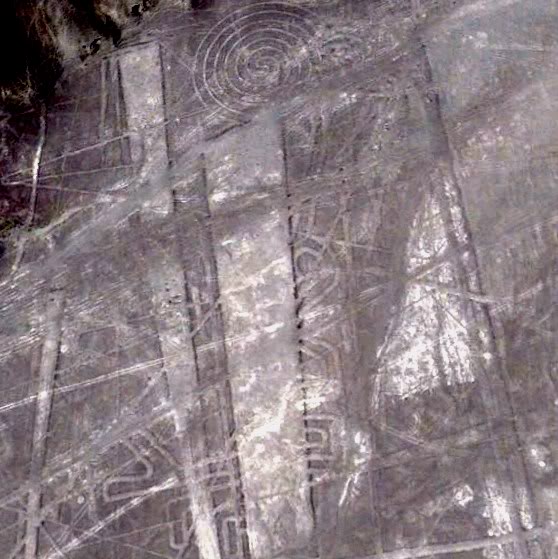 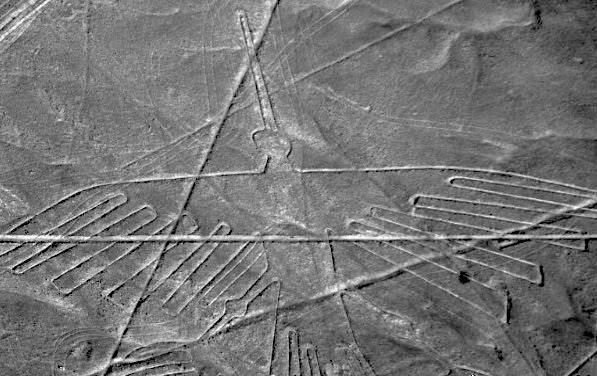 Some have proposed theories as to their origin. I am skeptical.

Swiss author Erich von Däniken suggests the Nazca lines and other complex constructions represent higher technological knowledge than he believes existed when the glyphs were created. Von Däniken maintains that the Nazca lines in Peru are runways of an ancient airfield that was used by extraterrestrials mistaken by the natives to be their gods.

I couldn’t help but draw my own connecting lines between these ancient sites and the modern sites now being constructed at ALMA. And, the fact they are both sited in the Andes of South America is kind of remarkable.