At this time of year in the mid-west, we begin seeing many examples of mushrooms, mold, and fungi of all sorts growing in many places. The dry lawn is not one of them. They are more obvious in the wooded area out back. 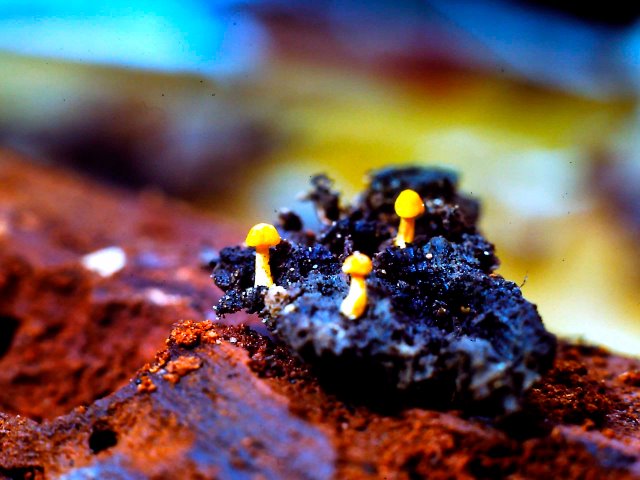 While digging around in the debris below the trees out back of the house, I spotted these ¼” tall fungi attached to a clump of matter. I have no idea how to ID fungi…no books or experience. It doesn’t really matter. I liked how they contrasted with the dark background.

I looked around more carefully and found two other examples of tiny fungi on some other debris. These were about 2″ tall. The pictures are overexposed and not quite focused on the fungi. It’s hard to work on your knees, in a dimly lit environment, and still get a good picture. Blogger and wildflower photographer Steven Schwartzman has a list of 40 things to say about getting the best shot. If you like flowers and want to see some examples, visit his beautiful blog. He says… 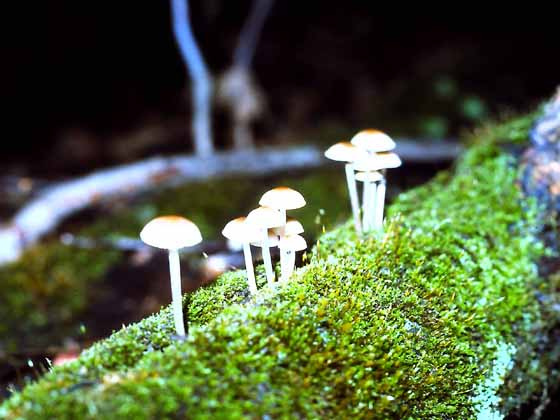 Here are a few more 2″ ones found in the same vicinity. Each year, in the same part of the yard, we get some large ones that look like these tiny fungi, but are 8″ tall. I will watch for them and try to get a picture. 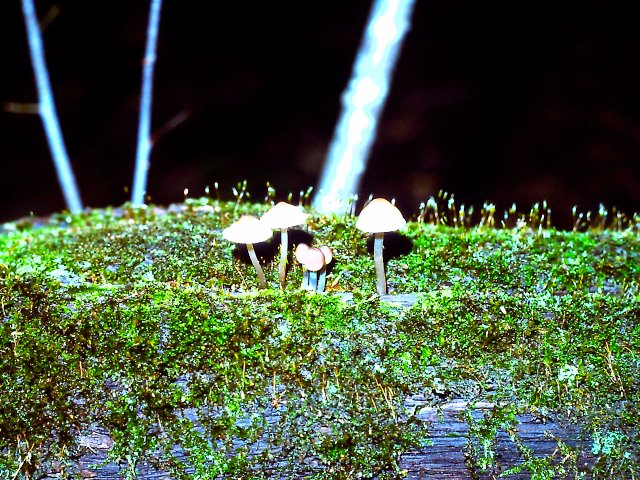 These tiny organisms are not the smallest fungi in the world. They are only a part of the amazing diversity of life in the nooks and crannies everywhere. And, I do mean everywhere. Athlete’s Foot caused by tinea is an example, as is yeast. There are nearly 100,000 described species. Estimates go as high as 1.5 million different ones.

Fungi are also some of the largest of creatures. The Humongous Fungus in east central Oregon covers covers 2,385 acres. It is also believed to be the oldest living specimen at somewhere between 1,900 to 8,650 years.

For much, much more about fungi, visit the American Phytopathology Society.

10 thoughts on “Out the Back Window | Tiny Fungi”