NASA’s Solar Dynamics Observatory (SDO) observes and images the sun at ten different wavelengths. On January 22, 2013, this image was released in an article describing those wavelengths and what they tell us about the sun. You can access the article here. This post is about the information provided by each of the specific wavelengths used to observe the sun and how you can easily access it yourself. In addition to the science available, this image is a beautiful and striking quilt of color. It is one of many NASA images that are works of art. 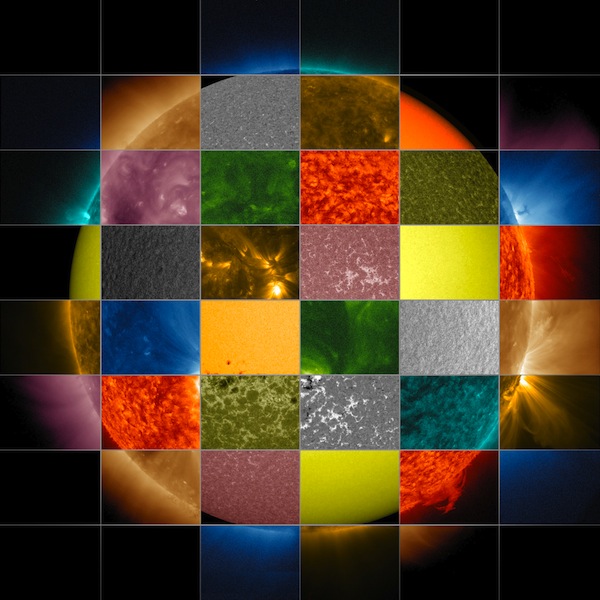 When you view the sun with your eyes or a normal camera, you are seeing a spectrum of colors from red to violet. You may remember roygbiv from school. The sun’s output in this visible spectrum peaks around yellow. Our eyes are also most sensitive to that. However, this visible spectrum is but a small part of the very wide ranging electro-magnetic spectrum. The sun radiates in an extremely broad range of wavelengths. Each comes from a different set of dynamics taking place on the surface and in the atmosphere of the sun.

More about the electro-magnetic spectrum and what those wavelengths reveal about the sun.

The E-M spectrum is composed of a continuum of wavelengths from the long radio to the very short gamma. All E-M waves regardless of wavelength travel at the speed of light through space. The product of the wavelength and frequency of the waves equals the speed of light. So, long radio waves have a low frequency. Short gamma waves have a high frequency. Another aspect of E-M waves is their energy. Energy is proportional to their frequency. Hence, high frequency gamma waves are very energetic and dangerous. Low frequency radio waves are less energetic and not dangerous. We are constantly bombarded by them from terrestrial and outer space sources. 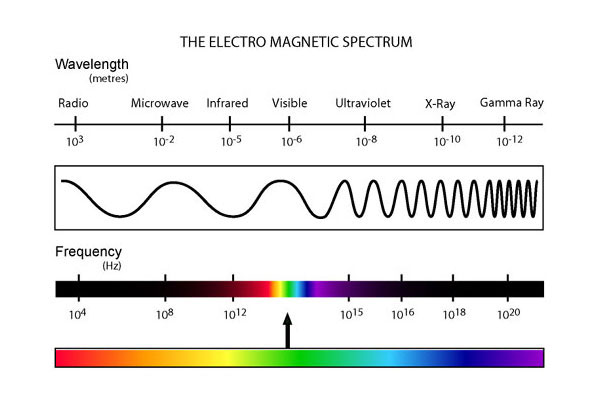 The surface of the sun is basically a hot gas at a temperature of ~6,000 Kelvin. Kelvin temperatures are scaled from absolute zero and are 273˚ higher than Celsius temperatures. Hot gas at that temperature emits yellow-green light. Solar flares from storms on the sun can reach temperatures of 6,300,000 K and emit light in the extreme ultraviolet, invisible to our eyes. But, instruments on the SDO spacecraft do see it, and many others invisible to our eyes. As a result of these observations, scientists assign unique colors to the data output from the instruments to distinguish them from each other.

Not only does the sun contain many different atoms – helium, hydrogen, iron, for example — but also different kinds of each atom with different electrical charges, known as ions. Each ion can emit light at specific wavelengths when it reaches a particular temperature. Scientists have cataloged which atoms produce which wavelengths since the early 1900s.SDO scientists chose 10 different wavelengths to observe for its Atmospheric Imaging Assembly (AIA) instrument. Each wavelength is largely based on (one or two types of ions). Each wavelength was chosen to highlight a particular part of the sun’s atmosphere.

The table below lists the wavelengths SDO observes. The order is from the sun’s surface and higher up into the atmosphere. The wavelength unit is Ångström. (1 Ångström = 10-10 meter) Below the table is a set of corresponding images representing those wavelengths in the table. 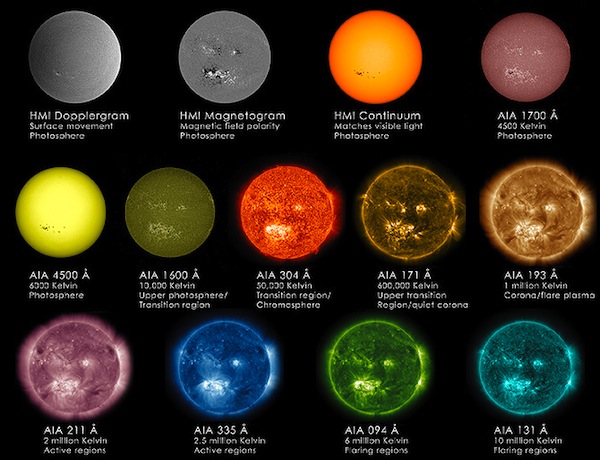 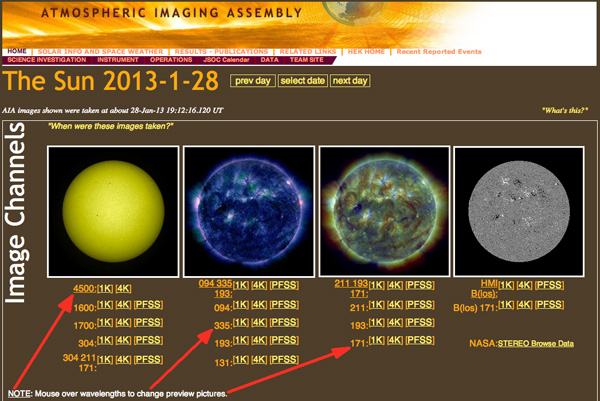 From the SDO Mission Statement…

The scientific goals of the SDO Project are to improve our understanding of seven science questions:

8 thoughts on “SDO | Staring at the Sun”